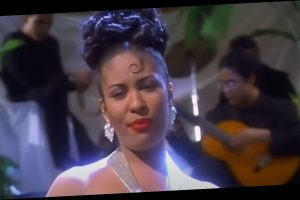 The late Selena Quintanilla was awarded with a Lifetime Achievement Award at the 2021 Grammy Awards, but many aren’t pleased. While fans agree that the award was much deserved, they think that the presentation of the award could have been handled better.

Per Biography, Quintanilla was awarded her first Grammy for her 1993 album Live!, making her “the first female Tejano artist to take home a Grammy for Best Mexican-American Album.” The singer’s promising career was cut tragically short when she was murdered two years later at the age of 23.

The singer’s lifetime achievement award comes after renewed interest in the singer following the debut of a Netflix show about her life last year, Selena: The Series. Decades after her death, Quintanilla still remains beloved. Sales of her compilation album, Ones, which was originally released posthumously in 2002, soared last year after it was re-issued on vinyl (via Billboard).

It’s easy to see why fans think that Quintanilla deserved better than the hurried tribute she received at the Grammys. “Did I miss the Selena tribute at the Grammys?” tweeted Congressman Joaquin Castro following Quintanilla winning the prestigious award. Another Twitter user slammed the “2 second tribute” which, as noted by E! News, consisted of a photo of Quintanilla appearing on the screen as her name was announced.

As the outlet pointed out, though, this is traditionally how Lifetime Achievement Awards are handed out, and Quintanilla was not the only recipient of the award this year.

Quintanilla’s sister, Suzette Quintanilla, was thrilled that the late singer got her due. “Twenty-five years later and who would have ever thought that she would be honored with this Lifetime Achievement Award?” she told ET. “I’m very proud, and I know she would be also in regards to the fact that we are Mexicanos-Americanos, we’re Mexican-Americans, and this is happening, It’s huge. It’s really huge for a different couple of reasons. More importantly, the fact that her career and her life is still being celebrated so many years later.”