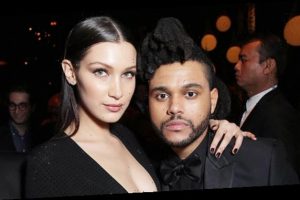 Fans of The Weeknd continued to decode the music video for his song ‘Save Your Tears,’ this time speculating that the singer’s unrecognizable visage was a reference to his former flame Bella Hadid!

The Weeknd‘s fans have been busy parsing out details and potential references in his music video for “Save Your Tears.” Now, his devoted listeners think the 30-year-old singer, born Abel Tesfaye, might have slightly shaded ex Bella Hadid with his unrecognizable look in the video! Fans immediately took to social media to discuss the details.

Some fans, however, weren’t as convinced. “No. His face was battered so he fixed it with many plastic surgery. He is saying he is healing,” one fan shared of their interpretation of the symbolism in the music video. In terms of the plastic surgery dig at Bella, the model has denied that she’s had cosmetic enhancements. “People think I got all this surgery or did this or that. And you know what? We can do a scan of my face, darling. I’m scared of putting fillers into my lips. I wouldn’t want to mess up my face,” Bella said in May 2018.

It’s true, however, that The Weeknd has definitely added a bevy of visual components to his After Hours album and era. But it hasn’t stopped fans from trying to decode the references, easter eggs, and more. In fact, this isn’t the first time fans have been led to believe that The Weeknd was referencing Bella on one of his tracks or music videos.

When the artist’s album dropped in March 2020, listeners immediately began sharing their interpretations of the lyrics on social media. One song, “Escape From L.A.,” seemingly referenced Bella, as well. “She got Chrome Hearts hanging from her neck,” is just one of the references to Bella that fans pointed out. Chrome Hearts is actually a brand that Bella has collaborated with on multiple occasions.

“Escape from LA is inspired by bella hadid.. chrome hearts????? oh yes abel we know you love her,” one fan tweeted. But it’s not only Bella who’s been the subject of speculation in connection to The Weeknd’s album. In fact, when the music video for “Save Your Tears” dropped on January 5, fans pointed out that an actress cast in the video bore a striking resemblance to Selena Gomez, whom The Weeknd dated for roughly 10 months in 2017. They even found potential references to Selena in the lyrics. Still, many are making connections to Bella, and for good reason!

The Weeknd and Bella started dating at the beginning of 2015. After they were spotted out and about on a number of occasions, the couple made their red carpet debut and appeared together at the 2016 Grammys in February. By November of that same year, however, the two went their separate ways. After his 10-month relationship with Selena Gomez in 2017, The Weeknd reunited with Bella in 2018, before splitting again in 2019.