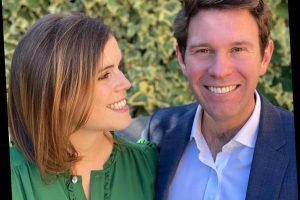 Princess Eugenie and Jack Brooksbank's first child will be 11th in the line of succession to the British throne — but will the baby receive a royal title?

The short answer? Probably not.

When Princess Eugenie and Jack tied the knot in 2018, they did not receive any new titles. Jack is simply known as "Mr. Brooksbank," while Eugenie has stylized her name as "Princess Eugenie, Mrs. Jack Brooksbank" since the nuptials. Despite being a member of the royal family — and Queen Elizabeth's great-grandchild — Princess Eugenie and Jack's son or daughter will likely earn his or her own income.

In addition to appearing alongside her family at royal events like Trooping the Colour and supporting charitable causes, Eugenie works as a director at the London art gallery Hauser & Wirth. Meanwhile, Jack works with George Clooney-founded tequila business Casamigos, which the actor sold in 2017.

When Meghan and Prince Harry welcomed son Archie in May 2019, he did not receive a royal title. Sophie, Countess of Wessex recently discussed her own children's future. Lady Louise, 16, and James, Viscount Severn, 12, are grandchildren of Queen Elizabeth but are unlikely to use their Her/His Royal Highness titles when they are adults, Sophie revealed.

"We try to bring them up with the understanding that they are very likely to have to work for a living,” the wife of Prince Edward told The Sunday Times. "Hence we made the decision not to use HRH [His/Her Royal Highness] titles. They have them and can decide to use them from 18, but it’s highly unlikely."

In a statement released Friday, Buckingham Palace announced,  "Her Royal Highness Princess Eugenie and Mr Jack Brooksbank are very pleased to announce that they are expecting a baby in early 2021."

"The Duke of York and Sarah, Duchess of York, Mr and Mrs George Brooksbank, The Queen and The Duke of Edinburgh are delighted with the news."

Princess Eugenie, 30, and Jack, 34, also shared their exciting baby news with a sweet Instagram post holding a fluffy pair of teddy bear slippers with the royal writing, "Jack and I are so excited for early 2021….👶🏻."

END_OF_DOCUMENT_TOKEN_TO_BE_REPLACED

END_OF_DOCUMENT_TOKEN_TO_BE_REPLACED
We and our partners use cookies on this site to improve our service, perform analytics, personalize advertising, measure advertising performance, and remember website preferences.Ok