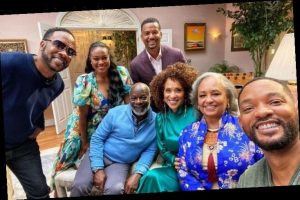 The ‘Aladdin’ actor has reunited with his former TV co-stars for a tour of the mansion where the group used to film their classic 90s television comedy series.

AceShowbiz –Will Smith was joined by his former “The Fresh Prince of Bell- Air” co-stars for a tour of the mansion that served as the family home on the ’90s sitcom.

In a video posted to YouTube on Monday (28Sep20), Will reminisced about his hit show, which celebrated 30 years since its debut earlier this month.

The actor, who fronted the series as a fictionalised version of himself, and his old music collaborator DJ Jazzy Jeff, opened the clip before the rest of the cast showed up and they checked out the inside of the mansion.

In addition to housing the hit sitcom, the property is also available for overnight night stays on website Airbnb for only $30 (£23) a night, making it a dream stop-off for fans of the series.

The pair was joined by former show stars Tatyana Ali and Karyn Parsons, who played cousins Ashley and Hilary Banks, along with Joseph Marcell, who starred as Geoffrey Butler for all six seasons of the show, and Daphne Maxwell Reid, who played Aunt Viv from seasons four to six.

Also missing was the famous Uncle Phil, played by James Avery who died in 2013, but the group honoured his character and the late actor with as a smiling portrait of him that hung inside the house.

Earlier this month, Will reunited with his co-stars for the filming of the show’s forthcoming HBO Max reunion special. While an air date for the reunion special has yet to be confirmed, is expected to air around Thanksgiving on HBO Max.

END_OF_DOCUMENT_TOKEN_TO_BE_REPLACED

END_OF_DOCUMENT_TOKEN_TO_BE_REPLACED
We and our partners use cookies on this site to improve our service, perform analytics, personalize advertising, measure advertising performance, and remember website preferences.Ok