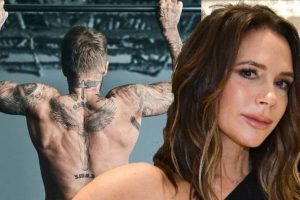 Victoria Beckham, 47, has been married to her husband David Beckham, 46, since 1999, with the couple sharing four children. Victoria has taken to Instagram to compliment her hubby as he shared a topless picture of himself exercising to start the new year.

David shared the sizzling snap to Instagram this afternoon in view of his 70.6 million followers.

The former footballer can be seen using a bar to exercise, with his muscular physique and tattoos on show.

He captioned the picture: “Back at it…”

Many took to the comments to compliment the former football player, including his wife.

Le1ai added: “The hottest man on the planet.”

Victoria has recently been posting a glimpse of her family holiday on Instagram.

The Beckham family are on holiday in Florida, and were joined by their children and Victoria’s parents Anthony and Jackie Adams.

In another image, David could be seen cosying-up to Posh as they enjoyed an evening out.

While in another their son Brooklyn and his girlfriend Nicola Peltz sat alongside Victoria’s mother Jackie and Brooklyn’s sister Harper.

It was reported last month that David had “treated himself” to the luxury vessel which he helped design.

A source told The Sun last month: “David had a look around some yachts in the summer, and decided to treat himself.

“He helped design the boat himself, and has been incredibly hands-on with everything.”

David proudly named his boat after his iconic shirt number he wore for six years while playing for Manchester United.

Seven also has a special meaning for David and Victoria as it is also the middle name of their daughter Harper.

Victoria made a name for herself as part of the British girl group the Spice Girls, with the group becoming the best selling female group of all time.

When the group split in 2001 this was just the start for Victoria as she began a career as a fashion designer.

In 2017 she was appointed an OBE in the 2017 New Years Honours for her services to the fashion industry.