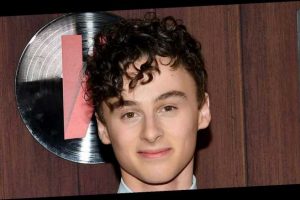 Wyatt Oleff is set to lead a new film inspired by rock band The Beatles!

It was just announced that the 17-year-old I Am Not Okay With This actor will star alongside Kevin Pollak and Janeane Garofalo in In My Life, Variety reports.

The movie “follows Evan, a 16-year-old John Lennon wannabe, who is thrilled when the Beatles move in next door to his Beverly Hills home before playing the Hollywood Bowl in 1965. He is desperate to meet his rock idol, while Lennon wants to meet Elvis before the rest of the Beatles do that night. To make it happen, they spend a day together that will forever change their lives.”

“One day in 1965, I found the Beatles were right next door to my house, and this became the launching point for a movie about my youth, my love of music, the 60’s and a very close call I had with my hero — John Lennon,” director Mark Rosman said in a statement. “The Beatles remain as relevant and popular as ever, and Lennon continues to be a huge fascination and draw all over the world. In a time when social consciousness is being reignited by changes in Washington, a look back at the ’60s and John Lennon is as timely as ever.”

“In My Life sheds light on a critical (and little known) turning point in Beatles history,” producer Simon Brooks said. “Mark’s personal account of a summer in 1965 seamlessly weaves true events with fiction that will bring audiences on a journey through the height of Beatlemania and particularly John Lennon. The talent of Wyatt, Kevin and Janeane will bring this great story to life.”

END_OF_DOCUMENT_TOKEN_TO_BE_REPLACED

END_OF_DOCUMENT_TOKEN_TO_BE_REPLACED
We and our partners use cookies on this site to improve our service, perform analytics, personalize advertising, measure advertising performance, and remember website preferences.Ok