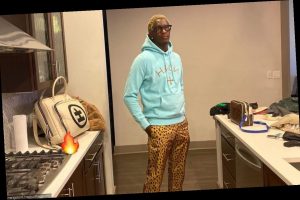 The ‘Danny Glover’ spitter cannot hide his disappointment at himself as he expresses his feelings in an Instagram Story video after losing $800,000 in gambling.

AceShowbiz –Young Thug may need to think twice before he makes a bet ever again. The rapper/songwriter is now almost $1 million short after he had an apparent bad luck during his recent trip to Las Vegas.

Making use of his Instagram account, “The London” hitmaker let his feelings be known after he lost $800,000 at one of the casinos in Sin City over the weekend. “Man, Vegas just won $800,000 from me,” he said in the Story video, clearly looking upset and disappointed at himself.

“Man, I’m through looking at everyone in that muthaf**ka,” Thugger, whose real name is Jeffery Lamar Williams, went on venting his frustration. It’s unclear though in which game he lost the money or if the huge loss has made him give up his gambling hobby.

While Thug has surely made a lot of money with his successful music career, he never wouldn’t miss a chance to earn some extra cash with gambling. Back in February 2020, the YSL Records head honcho bragged about winning $620,000 after betting $250,000 on the Kansas City Chiefs’ win in Super Bowl LIV.

“I betted a quarter. I betted 250 racks. I won 620,” he said in a video posted on his social media account at the time. After showing his good friend Gunna sitting beside him, he flipped the camera to show the Chiefs’ celebration on TV. “We don’t lose,” he additionally proclaimed. “All we do is win.”

His gambling hobby aside, Thug has been preparing to release his upcoming compilation mixtape from YSL Records, “Slime Language 2”. The project was expected to drop last year, but it missed out several planned release dates. With him hyping up the release of the record, fans can expect it to be delivered in the coming weeks.

Thugger recently also unveiled a star-studded remix to his 2020 collaboration with Chris Brown, “Go Crazy”, which peaked at No. 5 on Billboard Hot 100. Featuring Future, Lil Durk and Mulatto, the new version of the track has racked up millions of streams and may surpass the milestone held by its original version.