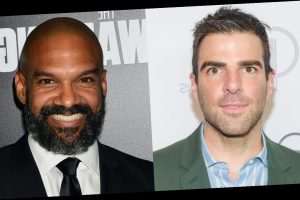 Zachary Quinto and Khary Payton are heading to Amazon!

The actors have joined the voice-cast for the upcoming animated series Invincible, Variety reports.

Based on the comic book of the same name by Walking Dead creator Robert Kirkman, Invincible “follows the adventures of Mark Grayson, the son of the most powerful superhero on Earth who develops his own powers and takes on a mission to save humankind. Quinto is set to voice Robot, one of Grayson’s superhero allies, and Payton will play Black Samson, a member of superhero alliance called the Guardians of the Globe.”

The show is set to premiere on Amazon Prime Video later in 2020.