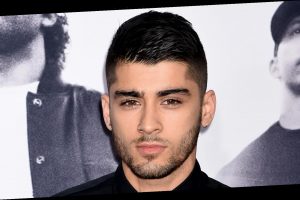 Former One Directioner, Zayn Malik is out and about, and no one knows quite what he’s up to. The Daily Mail, who spotted him sporting platinum blonde locks in New York on Tuesday, noted that he likely missed his sister’s wedding “due to work commitments.” Platinum blonde hair! Gasped Twitter, could it be that One Direction is getting back together? Another Twitter sleuth claims that music producer Alexander Oriet is “dropping hints” that Zayn Malik and One Direction’s Louis Tomlinson are collaborating. And, as iHeartRadio points out, Malik’s recently posted Instagram Stories of a soundboard.

But the post that’s really sending Zayn Malik fanatics down the rabbit hole isn’t directly music-related. It’s a recent Instagram story that shows a picture of St. George Theatre in Staten Island, New York, lights on, ripe for a performance. Currently, Malik’s not on the theater’s schedule of upcoming events, but that hasn’t stopped fans from speculating. “Zayn Malik back on stage it’s over for everyone else now,” posted one excited Twitter user. “Hey @zaynmalik,” tweeted another, “just wondering what is happening right now. cant stop thinking.”

Might Zayn Malik’s newest project be theater related? Possibly. In 2018, the Associated Press reported on an interview Malek gave with Manchester radio station Key 103, during which he flirted with acting, “I’d be interested in doing some acting,”  Malek confessed, “It’s always been something that I liked doing, even when I was growing up.” Malek further explained, “I did a few school performances and stuff. I’m not saying I’m Oscar-level winning actor right now, but I’m sure I can go to a few classes and learn things and pick it up. It’s definitely something I’m interested in.” Could he, then, be taking a few classes?

Malek’s Instagram has been suspiciously silent since late October, about a month after he welcomed a daughter into the world with his partner, Gigi Hadid. Then, the singer posted a black-and-white video captioned, “Cover Sessions.” The last time that Malek dropped his own music was in September, when he released “Better,” a track  whose music video has thus far garnered more than 26 million views (via YouTube). He’s had plenty of times, in other words, to work on surprising us with something new.

END_OF_DOCUMENT_TOKEN_TO_BE_REPLACED

END_OF_DOCUMENT_TOKEN_TO_BE_REPLACED
We and our partners use cookies on this site to improve our service, perform analytics, personalize advertising, measure advertising performance, and remember website preferences.Ok