Zoë Kravitz Has Filed for Divorce from Karl Glusman 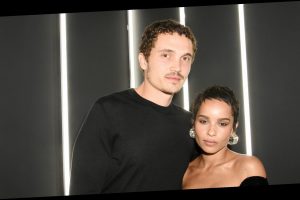 Zoë Kravitz and her husband of less than two years, Karl Glusman, have split.

According to court records obtained by People, Kravitz filed for divorce from Glusman ahead of the holidays on Dec. 23. A rep for the Big Little Lies star also confirmed that the couple decided to call it quits after 18 months of marriage exclusively to the publication. The pair first began dating in October 2016, and wed nearly three years later in Paris at the home of Zoë's dad, Lenny Kravitz.

Over the summer, Kravitz and Glusman celebrated one year of marriage with sweet tributes on Instagram. "One year," Zoë captioned a black and white photo of the couple sharing an intimate moment at their wedding ceremony. Karl, for his part, shared a lengthier sentiment, writing: "One year. 🌀‼️❔🌀❕Not the year we expected… but I feel like if we can make it through this, we can take on anything. I love you. More than anything."

He continued, "You’re my best friend… you crack me up and you melt my heart… you call me out on my bulls— and you challenge me to grow… I love you for that. And I’ll do anything and everything for you until the day I die. Now let's go save the world."

Back in May, Zoë gushed about married life with Karl during an appearance on Dax Shepard's podcast, Armchair Expert. When asked how she knew Karl was "the one," the actress explained that she's felt like she's "known him my entire life."

"He’s just one of the kindest people I’ve ever met," Kravitz told Shepard. "He’s one of the most honest people I’ve ever met and I feel like I’ve known him since I was a kid, even though I haven’t. There’s this connection where it’s like we’ve always known each other, we’ve always lived together. It doesn’t feel like this foreign thing. We have a history, it feels like. You know how sometimes you have a weird part of your personality only your friends know from when you were young? We have that same part of our personalities, if that makes sense."

END_OF_DOCUMENT_TOKEN_TO_BE_REPLACED

END_OF_DOCUMENT_TOKEN_TO_BE_REPLACED
We and our partners use cookies on this site to improve our service, perform analytics, personalize advertising, measure advertising performance, and remember website preferences.Ok