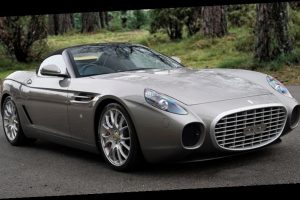 Zagato is one of the finest coachbuilders in the world, dating back to 1919 and since it has developed dozens of cars with the likes of Aston Martin and Ferrari. Now, one of its rarest creations is going up on the auction block — a one-of-six 2009 Ferrari 599 GTZ Nibbio Spyder by Zagato.

If you look past the longwinded name, you’ll see that this car is a Ferrari 599 GTB in Zagato guise. Having only been completed in January 2020, it comes as a very clean example of one of these much-loved Ferrari models and is only more desirable in its new look.

Finished in “Gunmetal Gray” over black leather, the car seems somewhat subtle if anything. However, a front nose conversion that reminisces of old Ferrari race cars with its wide front grille and two smaller ones on either side, as well as a completely revised rear end, is anything but subtle.

Additionally, Zagato converted this model to a spyder, something which was not offered with the original 599 GTB. A list of upgrades including Challenge Stradale-inspired wheels, red brake calipers, a yellow tachometer, and a carbon fiber steering wheel with LEDs have also been fitted, while the Ferrari’s quintessential V12 pushing out 612 BHP still remains.