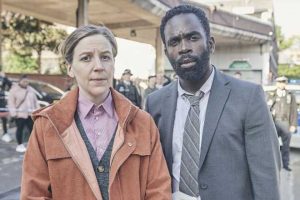 New ITV crime drama The Tower explores the mysterious deaths of a veteran beat cop and a teenage girl – and viewers had the best reactions to the premiere.

If you tuned into the premiere of ITV’s latest thriller The Tower last night, you’ll no doubt be celebrating the arrival of a new crime drama to fill the Line Of Duty-shaped hole in your heart.

Based on the novel Post Mortem, the first instalment of Kate London’s Metropolitan crime fiction series, the three-part dramafollows Detective Sergeant Sarah Collins (played by Gemma Whelan), who is tasked with investigating the sudden death of a veteran police officer and a teenage girl when they mysteriously fall from the roof of a tower block in south-east London.

When Collins arrived on the scene alongside her colleague DC Steve Bradshaw, the pair discover a five-year-old boy and a rookie police officer called PC Lizzie Adama on the roof. Within hours, Adama has vanished, leaving Collins in charge of getting to the bottom of both mysteries.

As the first episode aired last night, viewers watching along at home were quick to share their thoughts online. Needless to say, their hilarious observations reminded us just why the internet is such a great place. Here are some of our favourites…

Ever found yourself trying to get into a TV show only to be distracted by a familiar face? The cast of The Tower certainly had viewers scratching their heads.

Did someone mention “bent copper”?

Speaking of which, Emmett J. Scanlan, who plays DI Kieran Shaw, did draw some interesting comparisons…

We always appreciate a viewer who pays attention to the details.

Is it really a crime drama if there isn’t some dodgy situation with a phone?

We rest our case.

The Tower continues tonight on ITV at 9pm.