Home » Entertainment » 12 Pop, Rock and Jazz Concerts to Check Out in N.Y.C. This Weekend

12 Pop, Rock and Jazz Concerts to Check Out in N.Y.C. This Weekend

ARCA at the Shed (Sept. 25-27, 8 p.m.; Sept. 28, 2 p.m.). Following an ambitious spring lineup that included the Steve McQueen-directed “Soundtrack of America” series, as well as an elaborately staged Björk concert, this newly minted cultural space in Hudson Yards continues its opening-year programming with a performance cycle by this roving Venezuelan experimentalist. Known for making genre-bending music, both on her own and in collaboration with artists like Kanye West, Frank Ocean and FKA Twigs, Arca is certain to deliver a high-tech, immersive audiovisual experience across the four chapters of the series, which the Shed says can be enjoyed either individually or as a whole.
646-455-3494, theshed.org

JADE BIRD at Webster Hall (Sept. 24, 8 p.m.). At this year’s Newport Folk Festival, a cryptically billed headlining set turned out to feature an all-female lineup of some of the biggest names in country and folk: Dolly Parton, Sheryl Crow, Brandi Carlile, Maren Morris and Amanda Shires. Onstage with these veterans was this relative newcomer, a 21-year-old Brit with a love for Americana. Released in April, Bird’s self-titled debut album features alt-rock stompers like “I Get No Joy” and “Uh Huh,” on which Bird shows off the full might of her gritty alto, as well as more tender, lyrical folk ballads like “Does Anybody Know.” Expect to see both sides of Bird when she plays Webster Hall on Tuesday.
websterhall.com

KING CRIMSON at Radio City Music Hall (Sept. 21, 8 p.m.). For five decades, this prog-rock group has skirted norms. With a constantly evolving lineup and a hard-to-pin-down style, King Crimson is “more a way of doing things,” as their guitarist Robert Fripp states in their bio, than a band in the conventional sense. This year, the group’s 50th, has been a monumental one: In the spring, they opened up their massive catalog to new fans by finally making it available on streaming services, and they’ve made plans for a 50-show tour in recognition of the anniversary. Their stop at Radio City is No. 38; tickets have sold out, but the resale market is well stocked.
212-465-6000, radiocity.com

[Read about the events that our other critics have chosen for the week ahead.]

LIZZO at Radio City Music Hall (Sept. 22 and 24, 8 p.m.). By all accounts, this multihyphenate is the world’s hottest classically trained flutist; in addition to trilling on her instrument, she sings, raps and twerks. Though she dropped her first album in 2013 and earned major label backing in early 2016, Lizzo has truly found her light this year. Her Atlantic Records debut, “Cuz I Love You,” came out in April, and she earned her first Billboard No. 1 with “Truth Hurts” this month. Fans have embraced Lizzo’s up-tempo anthems and message of self-love. In May, they snatched up all the tickets for her back-to-back shows at Brooklyn Steel, and did it again for her Sunday night performance at Radio City, but tickets for Tuesday’s show are still available.
212-465-6000, radiocity.com

LONG BEARD at Baby’s All Right (Sept. 26, 6:30 p.m.). Leslie Bear’s musical path has not been a direct one: After graduating from college, the New Jersey native, who performs under the moniker Long Beard, released her debut album, then took a job as a computer programmer instead of taking to the road. Four years and a turn as Japanese Breakfast’s touring bassist later, Bear has just put out her sophomore album, “Means to Me.” Produced with Japanese Breakfast’s Craig Hendrix, it’s an ambling and inviting set of dream-pop tunes that examine ideas about home, growing up and growing apart.
718-599-5800, babysallright.com

JANELLE MONAÉ at Pier 17 (Sept. 25, 7:30 p.m.). A genre-bending musical innovator, actor and fashion trailblazer, this prolific artist is as obvious an heir as any to the throne left behind by Prince, her professional champion and close friend. Ever since she landed her first hit with 2010’s “Tightrope,” Monaé has struck a balance between retro-funk flair and pop futurism. The culminating effort of her career thus far arrived with last year’s “Dirty Computer,” which loosens up the sci-fi framework she has leaned on in the past to explore thoroughly human questions of identity and desire. A noted showwoman, Monaé is sure to deliver on spectacle when she performs at South Street Seaport.
212-571-0910, pier17ny.com
OLIVIA HORN 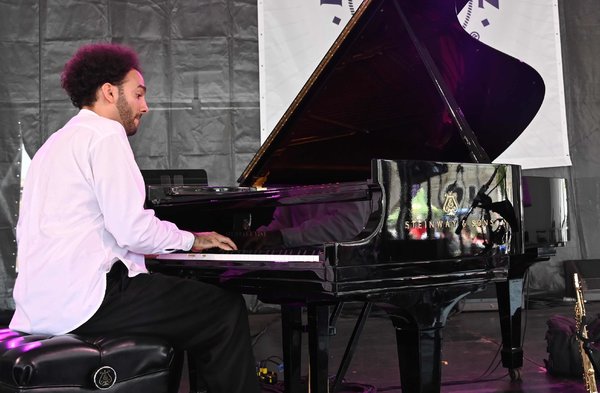 JANE BUNNETT AND MAQUEQUE at Flushing Town Hall (Sept. 20, 8 p.m.). A Canadian soprano saxophonist of straight, full tone and bold narrative concept, Bunnett has been collaborating with musicians from Cuba for decades. Most recently she has been working with Maqueque, a group featuring five musicians from Cuba’s young generation. The band features Joanna Majoko on vocals and percussion, Mary Paz on congas and vocals, Dánae Olano on piano and vocals, Tailin Marrero on bass and vocals, and Yissy García on drums. This month Maqueque released their sophomore album, “On Firm Ground/Tierra Firme,” mixing their choral vocal style with unrelenting grooves. An open dance lesson will take place an hour before this concert.
718-463-7700, flushingtownhall.org

STEVE LEHMAN TRIO WITH CRAIG TABORN at Jazz Standard (Sept. 24-25, 7:30 and 9:30 p.m.). In Lehman’s scattered, tone-smearing saxophone style, a lot of influences swim to the surface. He nods to a broad saxophone tradition — the blossoming flow of Charlie Parker; the clean, darting intellect of Steve Coleman — but also draws from today’s electronic avant-garde. You can sense that he’s probably listened to the rough, worried noise music of Ben Frost and to the drifting ambient sounds of Tim Hecker. On “The People I Love,” his latest album, Lehman takes on a range of sources — from the jazz pianist Kenny Kirkland to the electronica duo Autechre. Taborn, a stellar pianist, joins Lehman’s trio (the bassist Matt Brewer and the drummer Damion Reid) for that recording; the same lineup appears at these shows.
212-576-2232, jazzstandard.com

A CHRISTIAN MCBRIDE SITUATION at the Blue Note (through Sept. 22, 8 and 10:30 p.m.). He’s best known for his stewardship of the straight-ahead jazz tradition, but McBride, a bassist, stays engaged with many other forms of black popular music. With his Situation project, he always works with at least one turntablist and typically plays electric bass. The current iteration of the group features the illustrious Patrice Rushen on piano and keyboards, Ron Blake on saxophone, Alyson Williams on vocals and D.J. Logic on turntables.
212-475-8592, bluenote.net

MARC RIBOT at the Iridium (Sept. 25-26, 8 p.m.). Irritation befits Ribot, a restless gadfly of a guitarist, who has become one of downtown New York’s most esteemed elders. His instrument has always writhed with distorted fury, and recently he’s begun pointing it more squarely at the political discontents of his era. His most recent album is titled “Songs of Resistance, 1942-2018,” boasting guest appearances from some of his best-known collaborators: Tom Waits, Meshell Ndegeocello, Steve Earle and others. At the Iridium, Ribot appears in a small group, with the organist Greg Lewis and the drummers Nasheet Waits (on Wednesday) and Chad Taylor (on Thursday).
212-582-2121, theiridium.com

DAVID VIRELLES AND THURMAN BARKER & TIME FACTOR at the Leonard Nimoy Thalia Theater (Sept. 21, 8 p.m.). Virelles is a Cuban-born pianist who uses understated dissonance and darkness to interrogate — and, sometimes, explode — the sacred traditions of his home country. At this concert, the first in the New York chapter of the Association for the Advancement of Creative Musicians’ 2019 season, he performs a rare solo set. Also on the bill is the drummer Thurman Barker, a stalwart of the New York avant-garde whose deep experience runs from pop to free jazz. Barker performs here with the saxophonist Paavo Carey, the guitarist James Emery, the pianist Noah Barker and the bassist Dean Torrey. (On Wednesday at the Jazz Gallery, Virelles will also play with an impressive trio, featuring Rashaan Carter on bass and Eric McPherson on drums.)
212-864-5400, symphonyspace.org

END_OF_DOCUMENT_TOKEN_TO_BE_REPLACED

END_OF_DOCUMENT_TOKEN_TO_BE_REPLACED
We and our partners use cookies on this site to improve our service, perform analytics, personalize advertising, measure advertising performance, and remember website preferences.Ok