Home » Entertainment » 12 Pop, Rock and Jazz Concerts to Check Out in N.Y.C. This Weekend

12 Pop, Rock and Jazz Concerts to Check Out in N.Y.C. This Weekend

GUCCI MANE at Avant Gardner (Nov. 16, 8 p.m.). There was a moment when it seemed like this hip-hop artist, born Radric Davis, might fade from his central position in Atlanta’s music scene; legal troubles and struggles with addiction initially thwarted his mainstream success, even as he was recognized by critics as one of trap music’s foremost practitioners. Since his release from prison in 2016, though, Gucci Mane has seen unprecedented success as those artists whom he influenced — Migos, Drake and Rae Sremmurd, among others — pushed the spotlight his way. Healthy and free, the rapper has never sounded better.
347-987-3146, avant-gardner.com

PIXIES at Brooklyn Steel (Nov. 18-20, 8 p.m.). This influential alt-rock band is celebrating the 30th anniversary of their first full-length album, “Surfer Rosa,” with a tour and box set that also features their first release, 1987’s “Come On Pilgrim.” Their willingness to look backward is a boon for nostalgic fans: Pixies will perform both records in their entirety during a three-night run in East Williamsburg, Brooklyn. Sunday’s show is sold out, but tickets are available through resellers.
888-929-7849, bowerypresents.com

RANDY ROGERS BAND at Gramercy Theater (Nov. 17, 8 p.m.). Rogers, a gruff crooner, and his five-piece band (which includes Todd Stewart, billed as a “utility player”) are far from hip. They earned their stripes on the road in their native Texas, performing country music based in the genre’s rich outlaw tradition. Eighteen years later, consistency, not innovation, remains the band’s core value — in Rogers’s words, “the band that plays on the record is the band that you go see.” Collaborations with artists like Willie Nelson, Alison Krauss and Jerry Jeff Walker show how respected the band is within the country world, but the guarantee of good music and a good time is what keeps fans coming back.
212-614-6932, thegramercytheatre.com

ST. VINCENT at BAM Harvey Theater (Nov. 20, 8:30 p.m.). Annie Clark, the guitarist, singer, bandleader and contemporary rock visionary also known as St. Vincent, has spent the past decade upping the musical ante with each passing record, adding more synths, drum machines and pop gloss to what was initially a fairly stripped-down sound. This show, and the album she’s promoting with it, are designed to temper that progression: At BAM’s 837-seat theater, she will perform accompanied only by the pianist Thomas Bartlett, following up the just-released acoustic version of her 2017 album “Masseduction.” The intimate concert is sold out, but tickets are available through the resale market, and there will be a standby line on the night of the show.
718-636-4100, bam.org

JACK WHITE at Kings Theater (Nov. 16-17, 8 p.m.). A singular rocker and titan of his own musical empire, Third Man Records, White has been touring almost constantly since the March release of his third solo album, “Boarding House Reach”; with these two nights in Brooklyn, though, White is nearing the end of his marathon year. Despite having new music to promote, the prolific bandleader typically performs songs he first made famous while in the White Stripes, the Raconteurs and the Dead Weather. Unfortunately, you won’t be able to record White performing these modern-day classics since security will ask you to reliquinish your phone before entering the theater.
718-856-5464, kingstheatre.com

YOUNG FATHERS at Elsewhere (Nov. 20-21, 8 p.m.). This Scottish trio takes pride in being tough to pin down, but you could say their sound is a global, unorthodox, experimental vision of pop that places hip-hop at the forefront. For those seeking something to dance to, there are plenty of grooves, but they’re shrouded in pleasingly messy, rough-hewed mixes of synths and heavily distorted vocal lines. Politics figure front and center in the lyrics, but the group takes pains not to be didactic. “I think everybody has a dark side to them,” Alloysious Massaquoi, a band member, told the Guardian, adding, “We’re all complicit in it. It’s me looking at myself too.”
elsewherebrooklyn.com
NATALIE WEINER 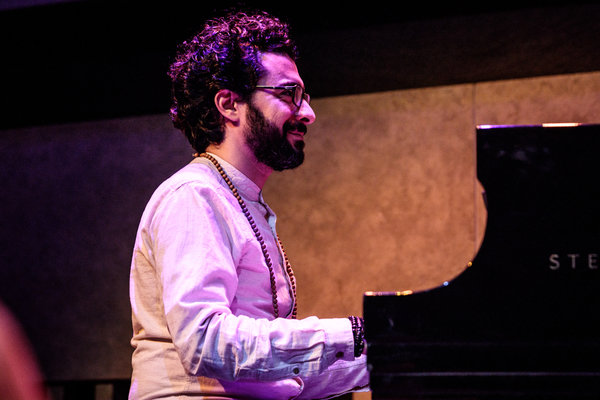 DIZZY GILLESPIE ALL-STARS at the Blue Note (Nov. 20-25, 8 and 10:30 p.m.). This annual engagement celebrates the birthday of Dizzy Gillespie, the co-inventor of bebop and a champion of Latin jazz, who died in 1993. The All-Stars’ ever-evolving lineup now stands at nine and boasts some of today’s finest straight-ahead talent (the trumpeters Terell Stafford and Freddie Hendrix, the drummer Willie Jones III), including a few who played with Gillespie himself (the pianist Cyrus Chestnut and the bassist John Lee). This year’s proceedings may have an elegiac air: The trumpeter Roy Hargrove, a longtime member of the group, died earlier this month at 49.
212-475-8592, bluenote.net

‘I NEVER LEFT AND NOW I’M BACK’: A CONCERT OF THE MUSIC OF ROSWELL RUDD at Murmrr Theater (Nov. 17, 8 p.m.). Rudd, a trombonist, always traced a winding path, and he took on fresh inspiration everywhere he went. He played a role in the jazz avant-garde’s first generation in the 1960s, then returned from a decades-long hibernation in the early 2000s with a broad, globally sourced approach. Rudd died last year at 82, and this concert is a celebration of his life, featuring performances from roughly a dozen ensembles led by his friends. The bands include Sexmob, playing music from Rudd’s days with the New York Art Quartet, and the pianist Jamie Saft’s trio.
murmrr.com

ELLIS MARSALIS QUARTET at Dizzy’s Club Coca-Cola (through Nov. 18, 7:30 and 9:30 p.m.). Jazz at Lincoln Center is the house that Wynton Marsalis built — so, by extension, it is the domain of Ellis Marsalis. This New Orleanian postbop pianist trained a generation of young jazz talent — including his son Wynton, the most influential improvising musician of his generation — and inspired them to fight for jazz as a proud, coherent tradition. Ellis Marsalis and his four musician sons have been collectively named National Endowment for the Arts Jazz Masters, and this week he spends four nights at Dizzy’s celebrating his 84th birthday with the saxophonist Derek Douget, the trumpeter Ashlin Parker, the bassist Jason Stewart and the drummer Gerald Watkins.
212-258-9595, jazz.org/dizzys

MARCUS ROBERTS OCTET at Village Vanguard (through Nov. 18, 8:30 and 10:30 p.m.). It’s been 15 years since Roberts — an erudite pianist with variegated harmonic texture — last played the Vanguard. It’s been almost twice as long since he recorded “Deep in the Shed,” the breakout album that established him as a Marsalisite Young Lion to be reckoned with. This weekend at the Vanguard, Roberts leads an eight-piece band playing the entirety of “Deep in the Shed” for the first set each night, followed by music from across his catalog for the second.
212-255-4037, villagevanguard.com

TAREK YAMANI TRIO at City College Center for the Arts (Nov. 16, 7:30 p.m.). Born and raised in Beirut, Lebanon, and now based in Harlem, Yamani plays jazz piano with more than a hint of Arab influence. Minor keys and Middle Eastern harmonic modes are everywhere; the rhythms move at a steady clop. But a loose-muscle swing softens the metric modes, and the result is sometimes like a new kind of rumba. Anyway, it feels distinctly at home in New York. Yamani calls this music Afro-Tarab, acknowledging jazz’s African roots and the Arab concept of “tarab,” or emotional transcendence through music. At Aaron Davis Hall he will play a mix of originals, jazz standards and century-old Arab songs, joined by the bassist Sam Minaie and the drummer John Davis.
212-650-6900, citycollegecenterforthearts.org
GIOVANNI RUSSONELLO