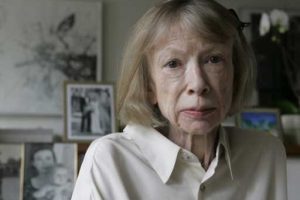 Author Joan Didion’s career beginnings were rooted at Vogue magazine after she won an essay contest in the 1960s, but her work spanned generations for her coverage of everything from pop culture to grief. She passed away on Dec. 23, 2021, from complications of Parkinson’s disease at the age of 87, but her legacy lives on through the beautiful works she leaves behind.

She married fellow writer John Gregory Dunne in 1964 and adopted a daughter, Quintana Roo Dunne, in 1966. Her incredible life with her husband and daughter was cut short when John died of a heart attack in 2003, and Quintana passed away from pancreatitis in 2005, leaving Didion behind to deal with her grief. She took to writing to sort through her feelings of mourning for her husband and created The Year of Magical Thinking, which became an instant classic.

The book was adapted for Broadway as a one-woman show starring Vanessa Redgrave, and nephew Griffin Dunne directed a 2017 Netflix documentary about her life called Joan Didion: The Center Will Not Hold. Calling his aunt “one of the greatest writers of our time,” Griffin honored her memory in a statement to People. “Her voice was that of a writer who saw things as they were before most of us. She wrote about grief to find out what she felt, but ended up giving hope and meaning to those who needed it most,” he wrote. “Now I find myself in grief, which I share with so many others who are also mourning this great loss.”

See more of Didion’s inspiring life in photos — and her sweet picture with the love of her life, John Gregory Dunne.