Home » Entertainment » 14 Pop, Rock and Jazz Concerts to Check Out in N.Y.C. This Weekend

14 Pop, Rock and Jazz Concerts to Check Out in N.Y.C. This Weekend

COLONIZED DREAMS: A MIPSTERZ EVENT at the Knockdown Center (March 9, 6:30 p.m.). Mipsterz, a collective whose name merges “Muslim” and “hipsters,” is led by the filmmaker Abbas Rattani, the illustrator Sara Alfageeh and the musician Yusuf Siddiquee and promotes the work of Muslim artists across genres. For this showcase, the group has curated a lineup of Muslim musicians, writers and artists who are mostly from New York. Humeysha, the musical alias of the Brooklyn-based singer-songwriter Zain Alam, blends spacey indie rock with more traditional Indian sounds from instruments like the tabla and puja bells. The D.J. Ayes Cold connects bhangra music with hip-hop and R&B, while the Lebanese-American percussionist Adam Maalouf performs mostly on the pantam, an instrument created from the Trinidadian steel pan and southern India’s ghatam drum.
718-489-6285, knockdown.center

MATTHEW DEAR at Elsewhere (March 8, 7 p.m.). A founding artist of the trendy electronic music label Ghostly International, Dear is better known as a bandleader, producer and D.J. whose work is steeped in Detroit techno. He has remixed songs for the likes of the XX and Spoon, and as a soloist, his work has long incorporated nearly equal parts electronic effects and live performance. On his latest album, 2018’s “Bunny,” which features Tegan and Sara and Greg Ahee from Protomartyr, Dear’s voice and songwriting give a more personal dimension to his reliably left-of-center yet dance-floor-ready beats.
elsewherebrooklyn.com

LITTLE FEAT at the Beacon Theater (March 8, 8 p.m.). At the half-century mark, a number of the musicians behind Little Feat’s best-known songs are still with the group, including the co-founder and pianist Bill Payne, the guitarist Paul Barrere, the percussionist Sam Clayton and the bassist Kenny Gradney. For this celebration of their 50 years onstage, expect a career-spanning retrospective that shows the range of this tricky-to-pin-down band, whose work spans country, funk, R&B and more. Regardless of what they’re playing, though, Little Feat have long been celebrated for their live act.
212-465-6000, beacontheatre.com

[Read about the events that our other critics have chosen for the week ahead.]

MEEK MILL at Hammerstein Ballroom (March 12-13, 8 p.m.). This Philadelphia-born rapper’s rise could hardly be more antithetical to 2019’s standard rap narrativeof getting discovered on SoundCloud by a major label, and then steering toward viral fame with the label’s help. Instead, Meek Mill took the long way to the top, first gaining credibility as a battle rapper and flirting with mainstream success, which was derailed by protracted legal battles and stints in prison. The strength of the work from the early years of his career, though — especially “Dreams and Nightmares,” the album cut that has become every underdog’s anthem, and the rapper’s best-known song — helped him push through. Finally, he is back in the world and back on the road. Both shows are sold out, but tickets are available through the resale market.
212-279-7740, mc34.com

ROBYN at Madison Square Garden (March 8, 7 p.m.). “I was like, I’m not going to write one single sad love song,” this Swedish pop singer told The New York Times of her latest album, “Honey.” “And then when I started writing, it was sad love song, sad love song, sad love song. But it’s in a different way.” Robyn has spent over two decades turning those sad love songs into nightclub gold, in iterations that have made her both a Billboard hit maker (“Show Me Love” and “Do You Know (What It Takes)” and a cult favorite (“Call Your Girlfriend” and “Dancing on My Own”).
212-465-6741, msg.com

WEEZER AND PIXIES at Madison Square Garden (March 12, 7 p.m.). These joint headliners offer some of the most enduring indie rock of the 1980s and ’90s — and TV on the Radio, who are opening, will represent the 2000s. Weezer have continued to release albums at a fairly prolific clip and still own a significant chunk of the alt-rock canon, from “Say It Ain’t So” to “Hash Pipe.” Their most recent brushes with the mainstream, though, have been less expected — namely, a viral cover of Toto’s “Africa.” After playing three nights at the comparatively cozy Brooklyn Steel last November, Pixies are bringing their unorthodox noise pop back to one of the city’s biggest stages.
212-465-6741, msg.com
NATALIE WEINER 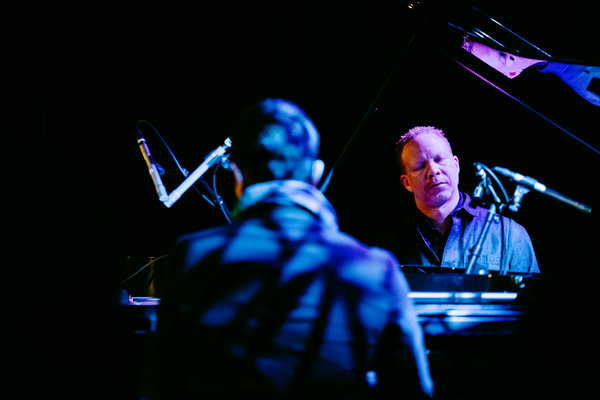 EZRA COLLECTIVE at Rough Trade NYC (March 9, 8:30 p.m.). Afrobeat from the 1970s, woozy new R&B, dub reggae and classic backpacker hip-hop all help define the sound of this London-based band’s new disc, “You Can’t Steal My Joy,” due next month. They have become something of a sensation, and the album is likely to be one of the year’s most-talked-about releases from Britain’s thriving contemporary jazz scene. The group — which features the brothers T. J. and Femi Koleoso on bass and drums, respectively; Joe Armon-Jones on keyboards; Dylan Jones on trumpet; and James Mollison on saxophone — will play material from the coming disc at this Brooklyn rock club.
roughtradenyc.com

VIJAY IYER AND CRAIG TABORN at Roulette (March 12, 8 p.m.). Two leading jazz pianists in their late 40s, Iyer and Taborn each have their own specific formulas, but both are built on a mix of studious abstraction and propulsive weight. Next week they will release their first album as a duo, the expansive, richly improvised “The Transitory Poems,” on ECM Records. The crystalline scatter of Taborn’s playing meets Iyer’s slightly thicker articulation in a sympathetic repartee; the pair seem to constantly divert their own path. They celebrate the album’s arrival at this concert, playing on two grand pianos.
917-267-0368, roulette.org

‘IDENTITY: FREEDOM’ at the Kitchen (March 7-9, 8 p.m.). The nonprofit organization Arts for Art organized this series of concerts to highlight some of free jazz’s most respected elders, all of whom are presenting suite-length original works here. The festival begins on Thursday with “Trail of Tears Continuum (1492-2019),” a 90-minute piece composed by the bassist William Parker (a founder of Arts for Art) featuring singers, poets and a five-piece instrumental group, as well as a film component. On Friday, the pianist Dave Burrell debuts “Harlem Renaissance,” a response to the life and work of the dancer Josephine Baker; Burrell’s sextet will play in conversation with two dancers, Marguerite Hemmings and J’royce Jata. The series concludes on Saturday with a presentation of Andrew Cyrille’s “Haitian Fascination” project, in which this storied drummer fuses the music of Haiti — his ancestral home — with avant-garde jazz.
212-255-5793, thekitchen.org

MIYA MASAOKA at the Park Avenue Armory (March 13, 7 and 9 p.m.). Masaoka’s style on the koto, a long, stringed instrument from Japan, bespeaks deep equanimity: She is comfortable allowing vast amounts of open space — playing quietly, just a few notes at a time — but within that serene composure she strategically builds a feeling of tensile anticipation. You can lie down and stretch out inside her music, but you can’t ever get completely comfortable. An eclectic collaborator across the worlds of traditional and avant-garde music, at the armory she debuts “The Long Arc of Time,” a work inspired by traditional Japanese Buddhist chants and by the poetry of Tracie Morris. The performance will feature Masaoka alongside fellow Japanese and American musicians and the soprano Kamala Sankaram.
212-616-3930, armoryonpark.org

OMAR SOSA AND SECKOU KEITA at Merkin Hall (March 9, 7:30 p.m.). Sosa, a Cuban pianist of great percussive power and fluid grace, released a collaborative album in 2017 with Keita, a Senegalese master of the kora (a West African stringed instrument typically used to create spiraling layers of rhythm), and the Venezuelan percussionist Gustavo Ovalles. Here the trio will perform some of the pristine, soothing music from that release. All three of these musicians now live in Europe, so a New York sighting is rare — especially featuring all of them together.
212-501-3330, kaufmanmusiccenter.org

KAMAAL WILLIAMS at Le Poisson Rouge (March 9, 7:30 p.m.). This young keyboardist crafts tightly woven grooves that are equally influenced by the cosmic soul-jazz of the 1970s as they are by the broken-beat and nu-jazz traditions of his native London. Partly thanks to his work in the short-lived but widely acclaimed duo Yussef Kamaal, Williams finds himself at the front of a crowded pack of young keyboardists on the busy British scene. Here he’s likely to draw heavily on the material from his debut solo album, last year’s Herbie Hancock-indebted “The Return.”
212-505-3474, lpr.com

MIGUEL ZENÓN at the Village Vanguard (March 12-17, 8:30 and 10:30 p.m.). One of the most casually prodigious alto saxophonists of today, Zenón devotes most of his creative energy to exploring the music of his native Puerto Rico, always through a vigorously intellectual lens. Last year he released a striking album, “Yo Soy La Tradición,” featuring music sourced largely from Puerto Rican folk traditions, retrofitted for saxophone and string quartet. And later this month, he will join up again with his longstanding jazz quartet to record a new album devoted to the music of Ismael Rivera, a heroic popular vocalist in Puerto Rico during the late 1960s and the ’70s. At this Vanguard run, the group — featuring Luis Perdomo on piano, Hans Glawischnig on bass and Henry Cole on drums — will set about breaking in this new material.
212-255-4037, villagevanguard.com
GIOVANNI RUSSONELLO

LOU REED DRONES at the Cathedral Church of St. John the Divine (March 13, 6:30 p.m.). Physics and music nerds, unite and rejoice! The moment you have been collectively awaiting has arrived: A handful of Lou Reed’s guitars, curated by his technician Stewart Hurwood, will be arranged against a stack of amplifiers and tuned to create a glorious noise that will morph as you wander about in this acoustically splendid cathedral. Holy feedback! It should be glorious.
stjohndivine.org/calendar
DANIELLE DOWLING