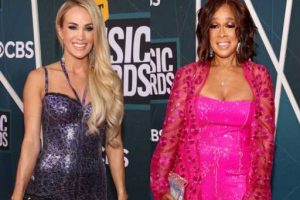 Just because the Oscars and Grammys are over doesn’t mean the red carpets have stopped. There is still plenty of red carpet events on the horizon, and we, for one, can’t wait to see what our favorite stars wear. This time, we’re swooning over the Country Music Television Awards. With any country music award show, you know there’s going to be some glittering, extravagant gowns on the red carpet — and the CMT Music Award Show delivered.

Founded back in 1983, the CMT is a television channel specifically devoted to country music. Ever since 1967, when it was called the Music City News Awards, fans could vote o their favorite country music stars take home awards. The fan-voted award show has been a staple for decades.

On April 11 at the Nashville Municipal Auditorium in Nashville, Tenn, our favorite stars came out to see who would take home an award. Jason Aldean, Carrie Underwood, and Miranda Lambert won big, taking home some of the most coveted awards from the show.

Along with the prestigious ceremony, the red carpet fashion was a must-see. From glittering gowns to sleek suits, everyone came to wear their best. Check out the stars who rocked the CMT red carpet below!