LONDON — They are among the last drawings that Michelangelo ever produced: ethereal depictions of Christ on the cross, his legs a nebulous haze, his face a spectral blur. Grieving at his feet are the Virgin Mary and St. John the Evangelist.

Those 16th-century chalk drawings hang on either side of a dual-screen video installation produced in 2001 by the American artist Bill Viola: two modern-day mourners (one pictured upside down) who weep in silence until their figures dissolve into a pool of water. 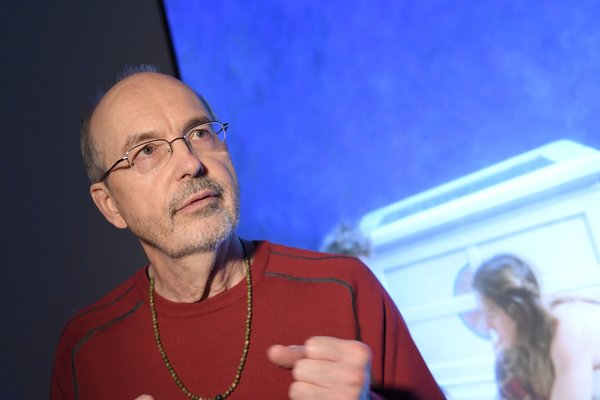 Born nearly 500 years apart, the two artists have been coupled in an exhibition opening Saturday at the Royal Academy of Arts in London. It may seem odd to pair Michelangelo — a devout Roman Catholic who worked for popes and painted the Sistine Chapel — with the avowedly secular Mr. Viola, who (though brought up Episcopalian) denies that his art is specifically Christian or religious, and links it to other strands of spirituality such as Zen Buddhism, Sufism and mysticism.

Yet staged in the Royal Academy’s dimmed and vaulted galleries, the show is something like a religious experience.

“Michelangelo is obviously working within and from the dominant tradition of his era: a very strong official tradition of Christianity,” said Ronald Bernier, chairman of the humanities and social sciences department at Wentworth Institute of Technology in Boston. Mr. Viola, he said, was working from a “tradition of technology and lack of belief. Yet they’re getting viewers to ask some of the same questions.”

Mr. Bernier, whose 2014 book describes Mr. Viola’s oeuvre as “a theological enterprise,” said he wouldn’t call Mr. Viola a “religious artist,” because he had an “openness to interpretation that doesn’t tie him to a religious tradition.”

That ambiguity makes it possible for Mr. Viola to address the issue of faith at a particularly secular moment in the West, when religion is shunned as a subject in art. “It’s almost as if he’s sneaking it in through the back door,” Mr. Bernier said.

The London exhibition is the brainchild of Martin Clayton, head of prints and drawings at the Royal Collection Trust, which manages the queen’s art collection. In 2006, Mr. Clayton invited Mr. Viola and his family to see the Leonardo da Vinci and Michelangelo drawings in the collection. Michelangelo’s Crucifixions were a stirring sight for Mr. Viola, according to the artist’s wife, Kira Perov, his closest collaborator and a co-curator of the Royal Academy show.

“Michelangelo was trying to come to terms with his mortality and his faith. And just the emotion that was pouring out of these drawings — we were in tears, basically,” she recalled in an interview. (Mr. Viola was unable to travel to London or to be interviewed for this article because he is unwell.)

Early in the show, a row of Michelangelo works — of the Virgin holding the baby Jesus or the dead Christ — hang across from one of Mr. Viola’s most confronting videos: “Nantes Triptych” (1992), a half-hour, three-screen installation showing one woman giving birth and another (the artist’s mother) on her deathbed.

Elsewhere, Michelangelo’s drawings of the resurrection seem to come to life in Mr. Viola’s giant, slow-motion films of bodies rising from water or ascending toward the sky.

That humanizing of the sacred is not something that Michelangelo would have objected to, said Andrea Tarsia, a co-curator of the exhibition. “There is a nonreligious aspect to Michelangelo, because he plays the humanity up so much,” Mr. Tarsia said. “For him, one of the central things was that Christ was made human in order to come down with us.”

Mr. Viola, who is of Italian descent, lived in Florence in the mid-1970s. There, he spent time recording sounds and echoes in the city’s churches, which contained works that Mr. Viola knew from studying art history. “I began to see the image as an element in service to a larger system, one that included my body and physical experience,” he recalls in an interview published in the catalog. “A lot of my ideas for installation came out of those experiences in Florence.”

His art — which became more overtly spiritual and inspired by sacred old master paintings after his parents’ deaths in the 1990s — has been shown in many churches. “The Messenger” (1996), where a naked male figure slowly emerges from and plunges back into water, was commissioned by Durham Cathedral in northern England. Two other video works were made for St. Paul’s Cathedral in London, which has a long-running program of commissions from contemporary artists.

Yet when the Vatican asked him to participate in its first pavilion at the Venice Biennale, he “politely declined,” he told The New York Times in 2014.

Ms. Perov showed similar reluctance in the interview. Asked about the place of God in the exhibition, she replied: “Let’s keep God out of it, because who knows what that is?”

Acknowledging that the show had a “cathedral-like” feel to it, she said it was ultimately about “addressing the really large questions that we all have in our lives.”

The sacred nature of the Michelangelo drawings is not in dispute. Late in life, Michelangelo embraced “Spirituali,” a reform movement in the Catholic Church that believed that salvation came through faith alone, rather than through doing good or avoiding sin, and that meditated intensely on Christ’s sacrifice on the cross. Those late sketches were “done purely for Michelangelo’s own spiritual devotions,” Mr. Clayton said. “The act of drawing is a devotional act, a Christian act of worship,” he added: They show “Michelangelo’s soul at work.”

What makes Mr. Viola’s very personal version of sacred art so palatable to secular modern-day audiences is its use of technology, Mr. Bernier said. The works are high-definition color videos projected on walls, translucent scrims or granite slabs, or played on flat-panel LCD screens, with amplified sound.

“He’s using the latest tools of modern technology almost against themselves: to make us slow down and think and ponder and be attentive in a way that, outside of that darkened room, we’re less likely to be,” Mr. Bernier said of Mr. Viola. “He’s wanting us to reckon with those very human, spiritual questions about ourselves through the most scientifically advanced, rational, nonspiritual dimension of technology.”