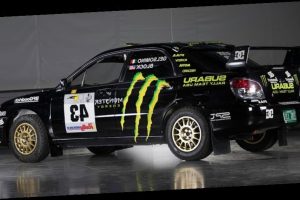 A world-record setting, championship-winning rally car owned by rally driver Ken Block is up for sale on new auction site Wall Street Motorsports. The 2002 Subaru WRX STi model is the actual car driven by Block when he achieved the world record for furthest jump in 2006.

The car started life as a standard 2002 Subaru WRX STi “Blob Eye” which was then converted into a 2006 “Hawkeye” edition, along with its slew of rally-ready specifications. The engine has been converted to a 2.0 L Group N-spec race engine, along with Group N-spec turbos, uprated intercoolers, and even the intercooler water sprayers. A rally-spec coilover suspension system has been fitted along with Group N Subaru suspension components, Group N Subaru brake calipers, 15-inch Speedline wheels, and BFG gravel rally tires, all of which to cope with the rally stage’s challenging terrain. The car comes with a 6-speed manual transmission with an active center differential, more fitting again for loose gravel and dirt than tarmac and public roads.

Interior-wise, the entire car has been stripped and left only with essentials, like Recaro HANS seats, a full FIA Group N roll cage, MOMO steering wheel, carbon fiber door cards and more. The STi even comes with a new fuel cell and a new cam belt, to save on a few maintenance points.

The car had won its first championship at the Rally America’s Rally of the 100 Acre Wood in 2006. Beyond the victory, the vehicle was also featured on The Discovery Channel’s Stunt Junkies, where it achieved a jump of 171 feet, setting a world record.