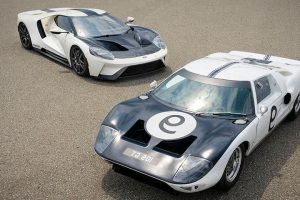 As the GT enters its final production year, Ford has pulled out all of the stops for this — supposedly — last special Heritage Edition. This time around, the Blue Oval has drawn from the 1964 Ford GT40 prototypes that led to America’s only Le Mans-winning supercar, taking first place on the podium in 1966-1969 and again in 2016.

Naturally, the car will be fitted with a mid-mounted twin-turbocharged 3.5-liter EcoBoost V6 engine that produces 647 HP and 550 lb-ft of torque, as well as a seven-speed gearbox that helps put the power down using only the rear wheels.

As for production numbers, expect it to be slim. In recent years, Ford has built between 27 and 343 editions of each of its year-specific Heritage Edition Ford GTs, so we expect it to lean closer to the double-digits. As for pricing, expect it to cost even more than the base Ford GT, which is around $400,000 USD alone. Take a closer look at the 2022 Ford GT ‘64 Prototype Heritage Edition above.