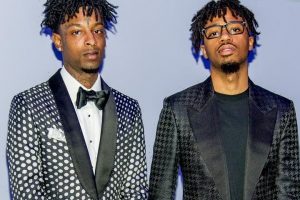 21 Savage and Metro Boomin have dropped the official music video for “Brand New Draco.” The track comes off the duo’s 2020 collaborative album Savage Mode II, a follow-up to the 2016 homonymous extended play.

Directed by Leff of Silver Spoon Film, the visual sees Boomin punch numbers on a calculator as Savage raps from behind a desk in a Wolf of Wall Street-esque montage. While the video is set amidst a stock market crash, the duo claims to have paved the easy path to creating wealth: in the middle of the song, a mock infomercial for a stock called $DRCO rolls, in which DJ Khaled, Shaq and Bow Wow make appearances, raving about how investing changed their lives.

This fall, 21 Savage will hit the road on J. Cole’s The Off-Season Tour, along with special guest Morray, to perform in 20 different cities. The tour kicks off in Miami on September 24.

In other music news, The Weeknd invested in a company that sells personalized songs from artists.
Source: Read Full Article