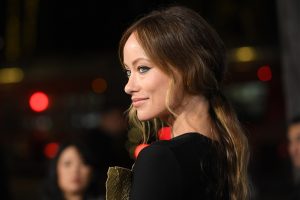 Olivia Wilde probably didn’t predict the rollercoaster year she’s had with a child custody case involving ex-fiancé Jason Sudeikis, a split with boyfriend Harry Styles, and ongoing headlines about multiple feuds on the set of her film, Don’t Worry Darling. Throughout all of the craziness, the 38-year-old director persevered through fashion. She made bold, creative choices that were the talk of the town. Instead of sitting down for endless interviews, she let her clothing tell a story on the red carpet — and we love her for that.

The mother of two has worked with stylist Karla Welch for over a decade, and together, they’re constantly changing up Wilde’s style. The latest major evolution came with the end of her Booksmart era into her Don’t Worry Darling generation — she went from boho chic to powerfully sleek. (And maybe a bit of Styles’ fashion influence seeped in — how could it not?)

Wilde has joked about her fashion sense being rooted in “a teenager from the early aughts.” She noted to InStyle, “My most comfortable state is when I’m wearing low-rise jeans, sneakers, and a sweatshirt,” she said. “In that, I am unstoppable. And if I’m in a high-waist jean, I can’t let my gut expand.” Now that she’s taken control of her career and become a force to be reckoned with as a director, her fashion has reflected her distinctive style choices this year.

“Directing a movie is the most badass thing I’ve ever done because it is the scariest thing I’ve done,” Wilde continued. “It forced me to tap into my inner strength, and you know what? That may be the most badass thing of all.” See the “badass” fashion decisions Wilde made over the past few years because she knows how to turn heads and start a conversation with her daring ensembles.