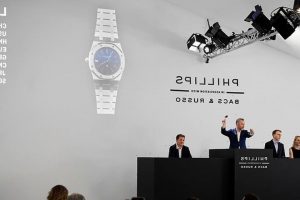 “Our first live sale of the year demonstrated the collectors’ hunger for rare top quality and never seen timepieces, especially those with provenance,” says Alexandre Ghotbi, Head of Watches, Continental Europe and Middle East. “With these results, the Royal Oak has clearly demonstrated its desirability on the market. This is a watch that created a new genre, and a new design language.”