Home » Entertainment » $250,000 De Bethune Tourbillon Is Two Watches in One 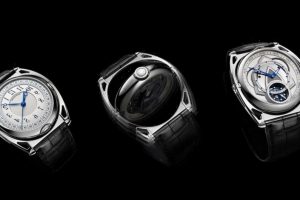 The only thing better than one De Bethune is a pair of them, something the Swiss independent watchmaker’s latest release manages to pack onto a single strap.

The De Bethune Kind of Two Tourbillon (the brand has a thing for bluing its titanium components using heat and has already borrowed the name of Miles Davis’ legendary album, Kind of Blue, for three of its more spectacular watches) features a reversible 43mm titanium watch head that pivots around its center inside a frame.

On one side is a fairly conservative dial, similar in style to the brand’s DB29 Tourbillon Maxichrono and on the other is the kind of Star Trek-inspired futuristic aesthetic that the brand and co-founder Denis Flageollet is more renowned for. This side also features a lightweight titanium tourbillon encasing a high beat 5Hz escapement, which is hidden on the reverse. A single handwound movement with five days power reserve keeps time on both dials, with a central seconds hand on one side and the 30-second rotation of the tourbillon marking time on the other.

Despite the complexity of the case and frame structure of the watch, De Bethune has still managed to incorporate its ingenious ‘floating lug’ system, which serves as a form of suspension on the wrist allowing the shape of the contact surfaces to change as the watch moves and making De Bethune watches among the most comfortable to wear.

The idea of a flippable watch is certainly nothing new, the most famous designs are closing in on their first century; the Jaeger-LeCoultre Reverso marking its 90th anniversary this year and the Cartier Tank Basculante is just a year its junior. But the idea of putting a different dial on each side of a reversible wristwatch (excluding double-sided pocket watches which have been around for centuries) came much later, the Reverso Duoface, for instance, didn’t arrive until 1994.