3 Savvy Comics Who Shine Where Sex and Politics Intersect

In her raucously funny 15-minute special on Netflix, Janelle James, an African-American stand-up, says she likes white guys, before pausing to clarify: “Not as human beings. Just in a sexual fetishized kind of way.”

James proceeds to get specific, explaining that she has a type of white man she prefers, and it’s not a progressive. “If I date a white dude,” she says, before zeroing in on a man in the front row, “I want to ruin your family.”

Sex and politics can make strange bedfellows and thus wonderful comedy. So perhaps it’s not surprising that many of the funniest political jokes from the sharpest young stand-ups today are smuggled into bits on dating and relationships.

James is starting the Janelle James Comedy Festival at the Bell House on Dec. 4, which replaces the Eugene Mirman Comedy Festival, a long-running Brooklyn institution known for its savvy, offbeat curation and jokingly self-aggrandizing title. James’s jokes veer from hyperbole to understatement, self-deprecating to disarmingly uncensored. “I am Caribbean, so I was homophobic until a few months ago,” she said at a recent show. 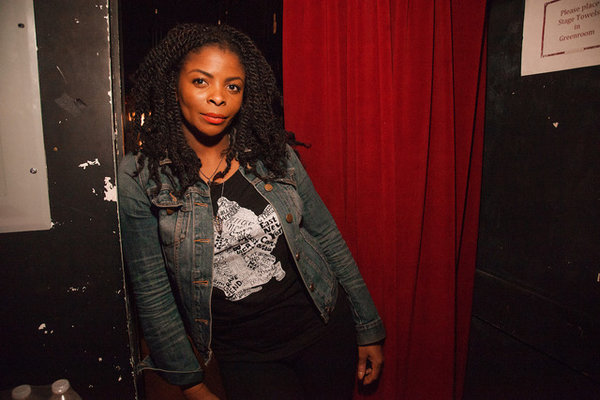 Despite what you might have heard, President Donald J. Trump hasn’t ruined comedy, but he has forced comics to adjust. (Last week, the comic Emily Heller released a new album, “Pasta,” that includes a nearly six-minute bit in which she explains her inability to find the president funny, and in so doing, makes a wonderfully florid joke that disproves her own point.)

Trump barely comes up in James’s jokes, but his effect on the culture infuses so many of her premises. She doesn’t need to mention his name when she says she stopped exercising because the world is coming to an end. You know what (and whom) she’s talking about.

Liza Treyger, a raunchier comic who will perform at the James festival on Dec. 5, delivers sex jokes that aren’t afraid to dive deep into the gory details or wallow in bad taste. A Holocaust joke she tells about hooking up during a Birthright tour to Israel might divide an audience, but those who laugh will laugh hard. Treyger regularly kills at shows in New York, but on “The Degenerates,” a collection of half-hour specials released on Netflix last month, she delivers a breakthrough performance.

The rhythm of this fiercely feminist show is contained in those three words. As she builds a case that the pleasure of women is of much lower priority than that of men, Treyger’s set takes a sharp turn from the personal to the political. “Why don’t women speak up?” she asks about this disparity, then answers her own question with some historical perspective: “Once Henry VIII chopped off the last woman’s head, we had a meeting and were like: ‘Size doesn’t matter.’” 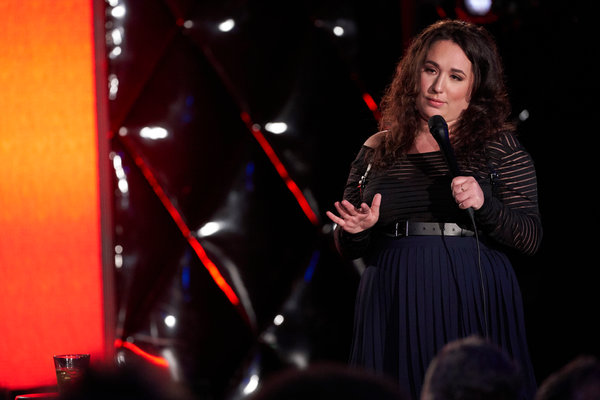 This is a special that lets you know its intent with a cutaway shot of the crowd that reveals women cracking up and men stone silent. Treyger’s casual asides become increasingly biting as she moves into uncomfortable territory and slows down. She carries herself with a sighing shrug and a roll of the eyes, but make no mistake: The structure of this set is carefully assembled like a magic trick, using misdirection and audience manipulation, and the pace is managed deftly. Early in the special, she reassures the men watching that she knows they are all “good ones,” but later, once she goes harder at rampant sexism, she serves up a brutal callback: “If you’re a dude and feel defensive, now you know you’re not one of the good ones.”

The smartest recent joke I’ve heard at the intersection of sex and politics does not seem at first to be particularly sexual or political. In her debut special, a half-hour on Comedy Central released last month, Emmy Blotnick, a 30-year-old rising star who writes for “The Late Show With Stephen Colbert,” describes the shock of realizing that many of her favorite songs, including ones from Britney Spears and Taylor Swift, were written by the Swedish producer Max Martin.

This one man, she concludes, taught her what “it means to be a sexy woman.” If not for him, she joked, she would never have tried on a halter top. How does this man know exactly what she wants to hear? She researches the question and says that she found an interview with one of his colleagues who said, to understand what women want, every month, “we read Cosmo.”

Blotnick appears stunned, calling Cosmopolitan magazine “the worst representation of women in the world,” adding: “For most of my life I’ve been doing a bad impression of a middle-aged Swedish guy doing a bad impression of an American garbage woman.” With the befuddlement of a narrator from a Philip K. Dick novel who just woke up to realize everything she thought was true was false, she says, “My life is a lie.”

What begins as a joke about culture turns into a resonant feminist diagnosis of the twisted way men speak for and manufacture art for women. There’s an intrepid intelligence in this joke as it traces the unlikely roots of mass entertainment. As she walks you through her thought process, she makes sure to keep dropping punch lines, albeit ones that don’t build to a declarative point but than unravel into exasperation. She has another excellent joke about how Amazon’s anticipating what you will buy makes you insecure enough to click on products to make you seem cooler.

In her comic “Black Mirror” view of culture, unseen forces in the entertainment industry shape our taste and identity. It’s perhaps why she has two jokes about her delight when people in culture make mistakes, as when the pop group Fifth Harmony misused a word in a hit song and lost one of its five members but kept its name. She clearly finds this endearing. “They make mistakes, just like me,” she said. “Now when you listen to them you can imagine you’re the fifth.”