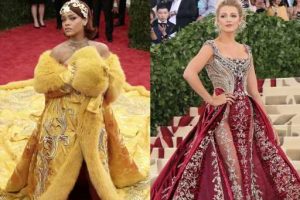 On every red carpet, there are guests who show up in something subtle, yet elegant, something they know looks beautiful on their bodies. Then there are others who do the same but can’t help but push the envelope when it comes to how dramatic their look can be on the red carpet. We see it at premieres, ceremonies, and of course, the Met Gala.

Every year, so many A-listers come in some of the wildest, most dramatic, and most sparkling gowns we’ve ever seen to the Met Gala, and we have no doubt the red carpet will be just as spectacular for 2023.

In case you missed it, Vogue Magazine posted on Jan 18 that they will be hosting the 2023 Met Gala on May 2 with the theme titled “Karl Lagerfeld: A Line of Beauty,” to honor the late designer. They uploaded all the details to their Instagram, saying, “This year, the #MetGala—which benefits the @metmuseum’s @metcostumeinstitute—falls on May 1 and will honor one of fashion’s greatest talents: Karl Lagerfeld. The accompanying exhibition, titled ‘Karl Lagerfeld: A Line of Beauty,’ pays tribute to the prolific designer who helmed major fashion houses including Chanel, Fendi, and Chloé. Michaela Coel, @penelopecruzoficial, @RogerFederer, @DuaLipa, and Anna Wintour will serve as the evening’s official co-chairs. And paying tribute to Mr. Lagerfeld is not solely a task for the museum’s curators: the 2023 dress code is In honor of Karl.”

So as we gear up for another dazzling Met Gala, let’s take a look back at some of the most elaborate looks of all time at the Met Gala. Check out our favorite, most outrageous looks at the Met Gala throughout the years below (and get ready to see a bunch from the iconic 2018 theme!)