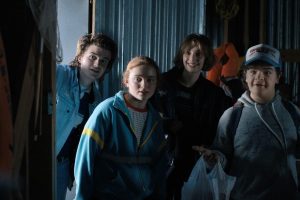 Volume one of “Stranger Things” season four has graced our screens at long last and, boy, there’s a lot to unpack! After successfully fending off the Demogorgon and Mind Flayer, our favorite gang of Hawkins teens are hard-pressed to figure out a way to defeat Vecna, the supernatural big bad this season who’s wreaking havoc in their hometown this season. Vecna has already proven to be much more malicious than any other Upside Down monstrous identity that stood before him, having claimed the lives of many teenagers thus far, including Chrissy, Fred, and Patrick. Following the big reveal of Vecna’s origin story in the mid-season finale, it appears that his vicious curse might befall many more already-tormented residents of Hawkins in the upcoming episodes.

The volume two finale is set up to be a climactic face-off between Vecna and our core group of protagonists, viewers are already bracing for the saddening reality of who might wind up sacrificing their lives for the greater good this time around. While we doubt that central characters such as El (Millie Bobby Brown), Mike (Finn Wolfhard), or Will (Noah Schnapp) will be bidding us goodbye before season five, there are a couple of names who are not exactly in the clear based on the events of the latest batch of episodes. Continue reading to see our predictions on who *might* not come out on the other side of the “Stranger Things” season four.