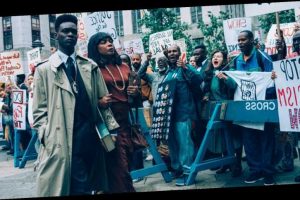 Ava DuVernay’s new true crime podcast, LEAP Files, is set to be one of the biggest podcasts of 2021. But you should definitely catch up with DuVernay’s documentaries, series and films before plugging in.

LEAP Files is going to be the podcast that everybody plugs into in 2021. The series will be Oscar-nominated director Ava DuVernay’s first Spotify podcast, after setting up a partnership with the streaming platform earlier in the year.

As reported by Deadline, LEAP Files will be “an investigative series that chronicles officers who commit murder, revealing the alarming truth about the blue wall of silence that protects police after they pull the trigger”. It will explore a new case each week, focusing on the lack of repercussions and accountability despite fatal wrongdoing.

Basically, it’s going to be a true crime series well worth listening to, with an important insight into police violence and abuse. After all, exposing the inequalities in society through incredible storytelling is exactly what DuVernay does so well. That’s why she was the first Black woman to be nominated for a Golden Globe for best director, and also the first Black female director to have her film nominated for the best picture Oscar.

With all this in mind, we’ve rounded up DuVernay’s best films, series and documentaries that you need to catch up with before starting her addictive new podcast.

When They See Us

When They See Us is a four-part Netflix series that dramatises the true story of the Central Park Five, five boys who were wrongfully convicted of rape and assault in 1990 and spent years in prison for a crime they didn’t commit as a result of police corruption and racism.

DuVernay’s 2015 film, Selma, is based on the 1965 Selma to Montgomery voting rights marches initiated and directed by James Bevel and led by Martin Luther King Jr., Hosea Williams, and John Lewis. Oprah was a producer on the movie, which earned an Oscar nomination for best picture.

In DuVernay’s 2016 Netflix documentary, 13th, she explores the history of racial inequality in the United States, focusing on the fact that the nation’s prisons are disproportionately filled with African Americans.

A Wrinkle In Time

Oprah Winfrey, Reese Witherspoon and Mindy Kaling star in DuVernay’s 2018 Disney film, A Wrinkle In Time. Based on a 1968 novel of the same name by Madeleine L’Engle, the sci-fi film celebrates female empowerment through telling the story of a young girl who, with the help of three astral travellers, sets off on a quest to find her missing father.

Based on the 2014 novel of the same name by Natalie Baszile, Queen Sugar centres on the lives of three siblings in rural Louisiana who must deal with the aftermath of their father’s sudden death and decide the fate of his 800-acre sugarcane farm. The series is about to run its fifth season and a sixth one has just been confirmed.