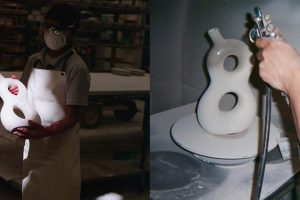 818 Tequila has just announced its ultra-premium Añejo tequila the Eight Reserve. The Eight Reserve is crafted by 818’s Master Tequileros in Jalisco, Mexico where it is a harmonized blend of Añejo that’s aged up to eight years in French and American barrels.

The tequila is described as smooth and rich with flavors of cooked agave, vanilla, cinnamon, dried berries, and praline. On the aroma level, there are hints of vanilla, clove & cinnamon, toasted nuts, honey, orange peel, and black cherry. One of the defining aspects of the Eight Reserve is the unique ceramic decanter in the shape of an “8.” This decanter was designed by Valerio Sommella and crafted by local artisans in Pachuca, Mexico.

Those interested in picking up a bottle can do so over at 818 on September 19 where each bottle will retail for $200 USD.