9 Idyllic (and Newly Reopened) Caribbean Hotels to Visit Next Year

By the time last year’s brutal hurricane season ended in the Caribbean, several resorts in the region — particularly on St. Barts, Anguilla, the British and United States Virgin Islands and Puerto Rico — were devastated. Collectively, the area suffered over $140 billion in damage, and tourism, the region’s main economic driving force, nose-dived. Buildings were flattened and basic services upended; on Anguilla, for instance, 90 percent of the electricity infrastructure was impaired, as was the main water supply. Just over a year later, though, almost all of the hotels in the affected regions have reopened, many with massive renovations and improvements that should draw crowds this holiday season — and help restore local economies. Here, a rundown of some of the most notable comebacks in the islands. 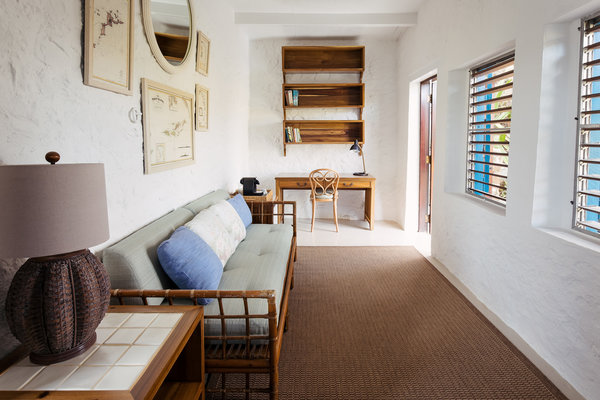 The reconstruction of this verdant, mountainous 850-acre private island resort was funded entirely by its owners, Henry and Gloria Jarecki and their family, who purchased the property in 1975. They invested heavily in a stronger infrastructure, including a new water filtration system, and enhanced internet service that will be less susceptible to future storms, as well as raised roads to better survive future flooding. The 18 stucco-walled suites and villas were also renovated — but the décor (spare but charming, with vintage botanical prints, rattan furniture and floral-patterned textiles) still feels wonderfully retro — and the Jareckis are helping to restore the damaged coral reef just offshore. They also expanded the island’s organic orchard, adding greenhouses and crops, including soursop, coconut and microgreens, as well as more than 100 chickens, which will supply all of the eggs for the resort.

Located on a wild, forested corner of tiny Dominica, in the West Indies, this secluded resort has been fully restored by its owner, Gregor Nassief, who reopened the property on Nov. 1. The six existing one-bedroom villas are now joined by a new two-storey one-bedroom villa that Nassief has named Ti-Fey: a treehouse of sorts made of polished, sustainably sourced Guyanese greenheart wood. It’s set high above the ground amid the jungle vegetation and offers a view of the crashing surf below through floor-to-ceiling glass walls. Nassief has also added a new seafood restaurant — which serves grilled lobster and fish caught in the surrounding waters — as well as a yoga pavilion that offers small classes and spa treatments.

After a year of renovations, the serene hillside Hotel Le Toiny reopened in October on its perch at the rugged eastern end of St. Barts. New additions include eight free-standing one- and two-bedroom villas overlooking the undeveloped expanse of Toiny Bay, which join the 14 existing ones, as well as a new infinity pool and bar — a literal beach club where the tables and chairs sit directly on the sand, steps from the water. The hotel has also recruited the chef Jarad McCarroll, who previously worked at the Michelin-starred restaurant Ours in London, to oversee its French-inflected namesake restaurant.

Located in the mostly residential area of Pointe Milou, on the northern coast of St. Barts, the Christopher comprises a series of modernist buildings that sit among some of the island’s most exquisite private houses, with views toward St. Jean Bay, a popular destination for windsurfing and snorkeling. Three new four-bedroom villas will debut in January, featuring the hotel’s modern, minimalist look (think cool slate-gray stone floors and slatted wooden day beds), while the restaurant, Christo, has a reimagined menu focused on local organic ingredients. The property’s Sisley Spa, meanwhile, has launched new treatments, including a Hawaiian-influenced lomilomi massage that incorporates acupuncture.

On the white-sand shore of Maundays Bay — considered one of the best beaches on Anguilla, with a view of St. Martin in the distance — this whitewashed, Mediterranean-style resort is celebrating its 30th anniversary this year. It has also been rebranded by the hospitality company Belmond following the hurricanes — a project that included a total renovation of its 170 terraced rooms and villas. Additions include a striking infinity-edge pool, a new spa with three treatment rooms and Cip’s, a Venetian-inspired restaurant from the team behind Cipriani.

After almost a year of rebuilding, the majestic cliffside Malliouhana resort will reopen this month on the shore of Meads Bay in Anguilla, with 11 new beachfront suites and four garden suites — all accented in the hotel’s signature palette of lemon yellow and turquoise — plus an upgraded spa with an ocean-view infinity pool. New cabanas line the two-tiered main pool, which now extends toward the cliff’s edge for even better views of the Caribbean. And for guests desiring extra privacy, there’s a new two-bedroom villa on the secluded Turtle Cove Beach, which features a garden patio, plunge pool, whimsical paintings by the Haitian artist Jasmin Joseph and seashell chandeliers.

In October, Jumby Bay — the remote resort off the northern coast of Antigua’s main island (which is only accessible by boat) — unveiled the second part of a three-phase reopening that includes a new five-treatment-room spa, reimagined interiors and a palm-fringed, slate-tiled infinity pool and teak pool deck. Inside, the Brazilian designer Patricia Anastassiadis has decorated the property’s airy guest rooms and common spaces with objects including vintage Portuguese trestle tables and a 1920s wooden canoe. There’s also a new shop that will sell swim- and beachwear from brands including Orlebar Brown and Anya Hindmarch. These improvements follow a change of management; Jumby Bay is now part of the German-based luxury brand Oetker Collection.

Although Puerto Rico is still recovering from the catastrophic effects of Hurricane Maria, life has come roaring back to the island — its capital, San Juan, is once again buzzing with newly opened restaurants, shops and galleries — and the same is true at its most high-end resort, the sprawling, 1,400-acre, 114-room Dorado Beach. The interiors have received a makeover — with a lighter, brighter color palette — but, luckily, some things remain untouched, like the glass and stone sculptures by the Puerto Rican artists Carlos Mercado and Rosa Ortiz that appear throughout the property. In the resort’s gardens, more than 300,000 new tropical plants have helped restore the lush grandeur for which the hotel is known.