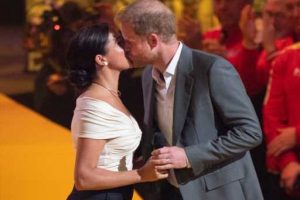 For the past few days, all anyone can talk about is that Prince Harry and Meghan Markle are finally back in the United Kingdom. While it may be for a short time, it’s the first time in a long while. It’s been a minute since the beloved pair had a public engagement together, especially in the United Kingdom. The last time was back in 2020 and the last time the pair went to the Invictus Games together was back in 2018.

The Invictus Games are an amazing international sporting event for wounded and sick Servicepeople. They had their debut back in 2014 and had occurred nearly every year. This year, the 2022 Invictus Games is the first one to occur since 2019 because of the ongoing COVID-19 pandemic.

Taking place at The Hague, The Netherlands, there is an array of sports that take place like weightlifting, a Land Rover driving challenge, wheelchair basketball, and swimming, to name a few. Per Yahoo, Prince Harry originally launched the first Invictus Games back in 2014. This year is the first time the pair returned since 2018.

From April 16 to April 22, the Games will take place, with Harry and Meghan in attendance for the first few days. The pair also met up secretly with the Queen before the games.

While the lovebirds are there, let’s see what the pair have been up to since they landed in the UK! Check out the photos below!