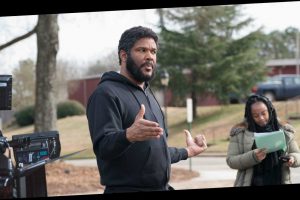 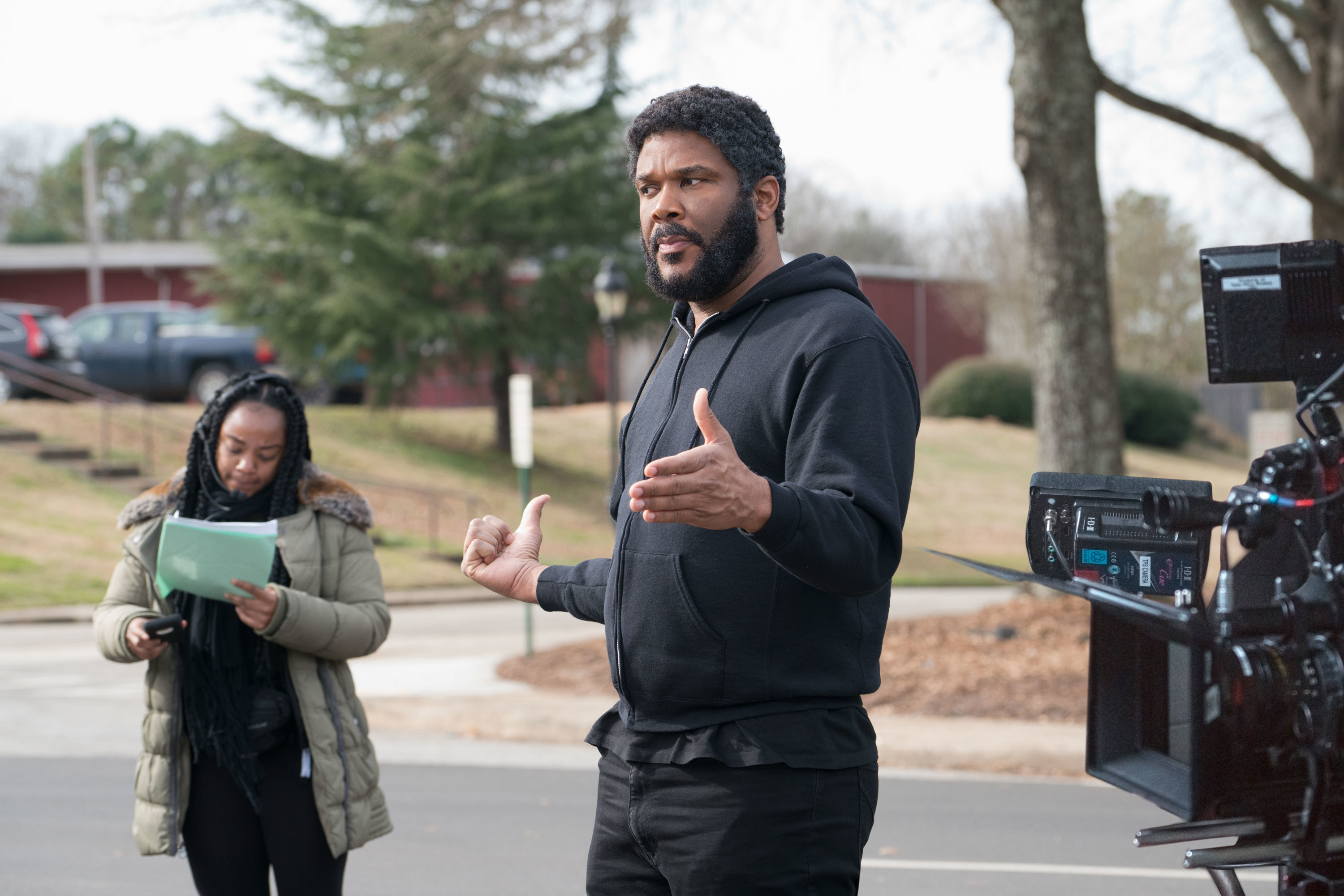 Tyler Perry on the set of his new Netflix movie, A Fall from Grace.

Tyler Perry’s latest film, A Fall from Grace, which is his first to debut on Netflix, is by all appearances intended to be a thriller. But when I watched the movie this past weekend, I couldn’t suppress my laughter.

The story, on paper, could be an interesting one: Grace Waters (Crystal Fox) is a single, middle-aged black woman who is swept off her feet by Shannon DeLong (Mehcad Brooks), whose real-life good looks are squandered under an atrocious wig. Of course, things are not what they seem, and the romantic bubble Grace enjoys for a brief moment is suddenly burst when she finds out that Shannon has stolen sensitive information that allows him to wire nearly $300,000 from her job at a bank — which gets her fired — and forces her to remortgage the house that she’d already paid off.

After a nearly comical amount of disrespect at the hands of Shannon (including him cheating on Grace while living in the house she bought), she snaps and beats him with a bat — a scene that should feel shocking and emotionally cathartic, but instead plays as ludicrous because of how many direct wallops the man takes to the head. Spoiler: He somehow lives, though we don’t find this out until the film’s end, and Grace is imprisoned for murder. (Somehow Shannon’s limp body is removed from the basement of Grace’s home after she flings him down a flight of stairs and drives to “the middle of nowhere.”) The only person she tells about the “murder” is her best friend Sarah (Phylicia Rashad). It’s ridiculous, yes, but that’s the norm in the Tyler Perry Cinematic Universe.

Perry’s sloppy execution of his own questionable ideas continues to disappoint. The downtrodden black woman trope is so inescapable in Perry’s work that it practically feels like self-parody at this point. The script is extremely underbaked. And the countless continuity errors, as pointed out by many people on the internet — Grace putting on slippers in one scene and having them magically disappear in the next; wigs inexplicably changing size and shape in the middle of a scene; paid extras who truly seem like they were just showing up to work so they didn’t get fined — really makes you wonder if Perry puts any thought or care at all into his filmmaking at this point. The project was reportedly filmed in five days.

Crystal Fox and Mehcad Brooks in A Fall from Grace.

As a self-made Hollywood heavyweight, Perry has come a long way since the days of his morality-heavy stage plays, where he often dressed in drag as the unruly character Madea, and the 2005 success of Diary of a Mad Black Woman (which was panned, but grossed more than $50 million against a $5 million budget). In the years since, Perry’s films have continued to be commercial hits: A Madea Family Funeral, the last installment of the now-defunct Madea series (which, somehow, got worse in quality over time), earned more than $74 million. There’s no doubt that Perry has worked hard to carve out a space in Hollywood that very few black people have had access to and has put in a tremendous amount of effort to employ black talent throughout his career.

Perry’s speech was inspiring — it’s been viewed more than 1 million times on YouTube — and there were moments when he had the audience of hundreds of onlookers on their feet, praising his testimony. He spoke of hiring now-marquee, Oscar-approved actors like Viola Davis and Taraji P. Henson (who introduced him) before their Hollywood careers really took off. He also talked about how the studio lot he’s built — which rivals the size of Warner Bros., Walt Disney Studios, and Paramount combined — was once land occupied by Confederate soldiers. “Now that land is owned by one negro,” Perry said, quite poetically.

But Perry’s rags to riches tale, while it may be moving, doesn’t mean the director is above critique. I can understand Perry’s desire to build his own domain in an industry that notoriously undervalues black art. Black creators have done it before; take Berry Gordy, founder of Motown Records, as an example. But Gordy was smart enough to know he needed to rely on great songwriters and musicians to make his stars pop on the radio. It’s time for Perry to move beyond uninspired, seemingly obvious rip-offs and use his power and influence to make space for the work of artists with something new to say. Pushing out an endless stream of lackluster content isn’t doing anything to elevate his own career or his community.

Which brings us back to A Fall from Grace. Watching this obviously predictable, horribly paced, all-around bad movie, you can’t help but feel that it was created by a person who could really benefit from having a second pair of eyes to give him feedback. Perry made clear he doesn’t have that in a tweet earlier this month, displaying a stack of at least 10 scripts he wrote — all by himself — in 2019.

“I don’t know if you know this, but all shows on television have a writers room … Well, I have no writers room. Nobody writes any of my work. I write it all,” Perry says in the video he posted. The tweet — captioned “WORK ETHIC!!” — was mercilessly dragged by people on Twitter who wanted the director to know this wasn’t necessarily a good thing.

“Sir, you need some help,” said cultural critic and For Harriet founder Kimberly Foster in a YouTube video about Perry’s glee at having churned out so much content in such a short amount of time. “The TV shows and the movies are horrible and we’ve seen no growth, no progression. Imagine being just as bad at your chosen profession at 50 as you were at 30 and thinking that’s a flex.” 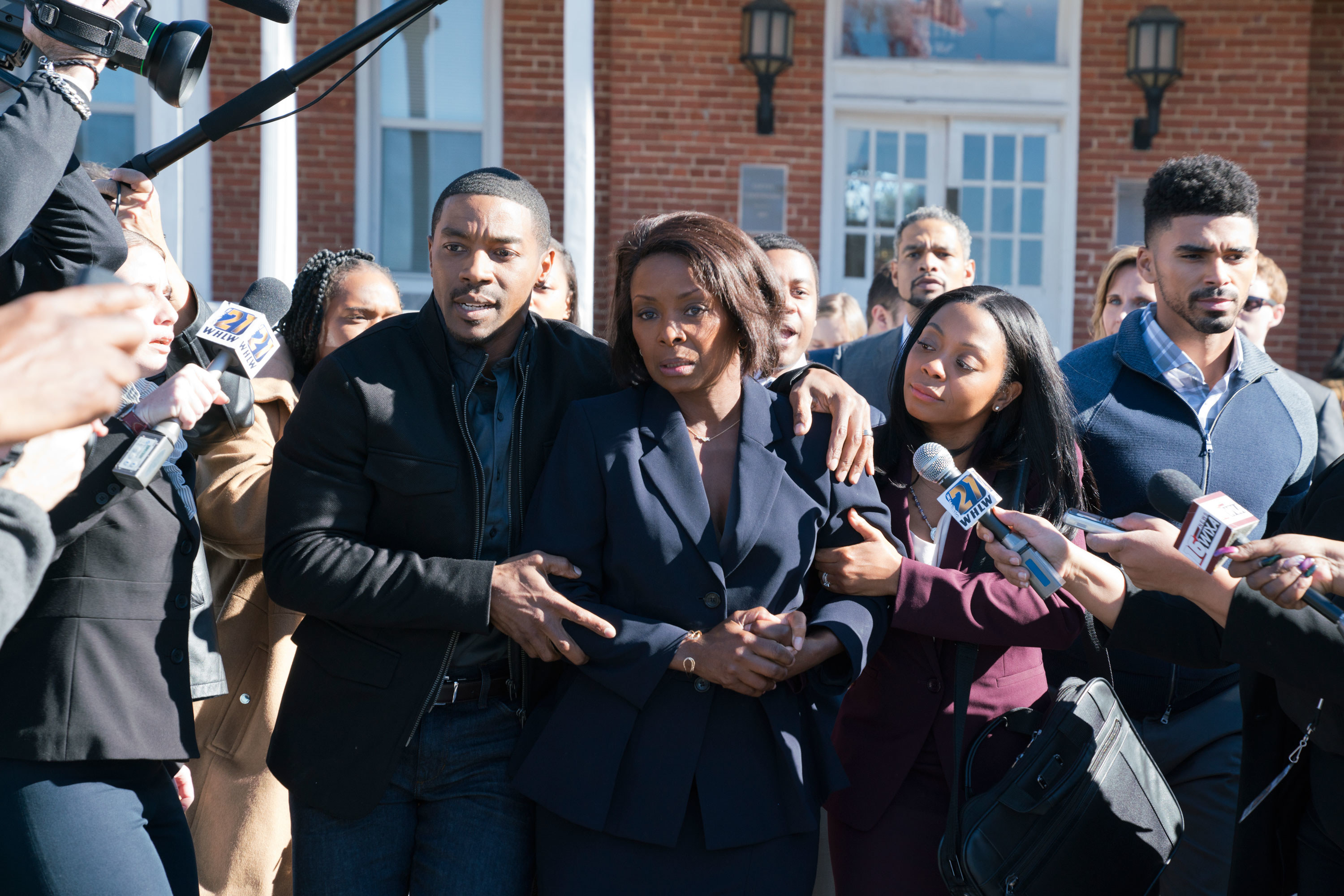 Several aspects of A Fall from Grace could have clearly benefited from some outside input. For example, wouldn’t it have been helpful to consult with someone about how the legal system works? Because, as it happens in the movie’s murder trial, a lawyer (Bresha Webb) demands to call a witness to the stand after closing arguments have already happened. How is it that Rashad’s character, Sarah, somehow escaped capture from authorities amid all the mayhem during the final act? Why were Grace and Shannon drinking wine in a diner? (Is that a thing? If so, it should not be!!) Why did none of Grace’s coworkers defend her honor against the bizarre claim that she just casually wired a huge amount of money away? Why did A Fall from Grace feel longer than a three-hour Marvel movie when it was only 120 mins long?!

It seems lost on Perry that he should have a writers room because different people could provide new perspectives to enliven his art. And working with other writers to direct their screenplays — or simply to get their feedback — might help him move past the clichés and major blind spots that riddle his work, including damaging stereotypes about HIV, and tired tropes that result in shows and movies that are hardly distinguishable from one another. The lead characters in Acrimony, A Fall from Grace, Why Did I Get Married?, and so many other Perry-directed films are essentially the same person — either a down-and-out woman whose life is made better by a man’s presence, or a woman whose life is completely destroyed because of a man, or sometimes (to mix things up!) a combination of both.

For a man who seems to want to uplift and inspire his community, it’s long past time for Perry to consider collaborating with other writers to get him — and potentially them — to the next level. Though he’s become a formidable force in terms of the power he wields in the industry (currently creating multiple shows for Oprah’s OWN network, as well as a slate of projects for BET) Perry still operates as if he must do everything alone. But Perry’s not a struggling artist anymore, and the work he puts out can and should be better, especially considering his outsize influence.

As writer and former BuzzFeed podcast host Nichole Perkins said in a series of tweets about Perry’s latest movie, “Expecting your audience to accept such poor commitment to quality just because it’s FUBU is insulting.” One could say Perry is catering to a specific audience, which is fine. But what happens when the formulaic storytelling and uninspired “plot twists” finally exhaust his loyal base? Black audiences deserve better, and Perry has the power to deliver better (even if he cannot singlehandedly muster the creative energy required for the task). But the question remains: Will he ever try? ●

END_OF_DOCUMENT_TOKEN_TO_BE_REPLACED

END_OF_DOCUMENT_TOKEN_TO_BE_REPLACED
We and our partners use cookies on this site to improve our service, perform analytics, personalize advertising, measure advertising performance, and remember website preferences.Ok