Home » Entertainment » A Great One-Man Show Is Rare. Three at Once Is Remarkable.

A Great One-Man Show Is Rare. Three at Once Is Remarkable.

BERLIN — For a single performer to hold an audience spellbound over a whole evening is as rare as it is remarkable. A truly great solo show comes around only once in a long while — and this is especially true on the commercial stages of Broadway or the West End in London — which is why it seems incredible that there are three such productions running at leading playhouses in the German-speaking world.

The most unusual is “Böhm,” an ingenious puppet show at the Schauspiel Graz theater in Austria, about the life of the one of Graz’s most famous native sons, the conductor Karl Böhm (1894-1981). Nikolaus Habjan, who also hails from the city, directs and performs in this phantasmagorical chamber play about the career of a great artist whom Alexander Van der Bellen, Austria’s president, has called a “willing servant of the National Socialists.”

Written by the Viennese playwright Paulus Hochgatterer, “Böhm” is a contemporary attempt to address uncomfortable truths about Austrian responsibility for and complicity in the crimes of the Third Reich. “Avenue Q” it is not.

Karl Böhm may not have been a committed Nazi (he never belonged to the party), but he consistently benefited from the Third Reich’s cultural policies.

The dexterous Mr. Habjan, with his varied arsenal of puppets and wide-ranging repertoire of voices, including the conductor’s nasal Austrian whine, takes us through many such moments, including Böhm’s ascendancy to the music directorship of the Semperoper in Dresden, Germany, in 1934, after a conductor opposed to the regime was forced into exile, and Böhm’s enthusiastic support for the German annexation of Austria. Mr. Hochgatterer’s play jerks us through much of the 20th century in a hallucinogenic narrative constructed largely through flashbacks.

Various effigies depict the maestro as a cantankerous old man confined to his wheelchair in his final years or as a dictatorial, short-tempered perfectionist on the podium at the height of his career during the Nazi years. There are also “cameos” from several of Böhm’s favorite singers, including Walter Berry, Elisabeth Schwarzkopf and Christa Ludwig.

Mr. Habjan fluidly and expertly switches among life-size ventriloquist’s dummies, rod puppets and, in one startlingly effective scene, a mask of the conductor, which Mr. Habjan, dressed in a tuxedo with tails, holds in place while clutching a baton in his other hand. Throughout the evening, we hear much of the music Böhm was a noted interpreter of, including operatic and symphonic excerpts from Richard Strauss (another great artist tainted by his Nazi associations), Mozart, Beethoven and Wagner. “Böhm” is an elaborate, virtuosic romp through a scorched landscape of aesthetics and ethics and a scathing indictment of a towering musician who, in the name of art, became a puppet of the Third Reich. 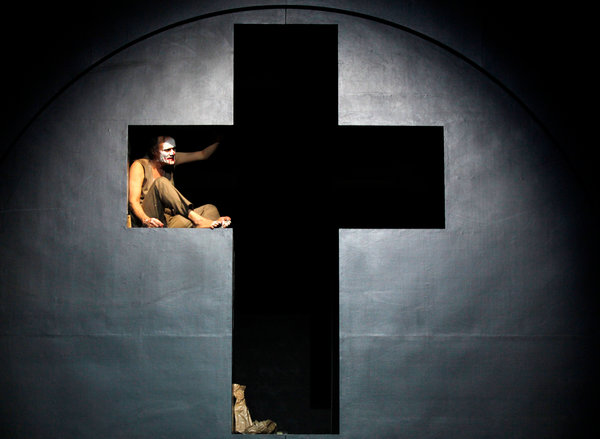 There are no strings attached in Karin Beier’s “Submission,” a shattering dramatization of Michel Houellebecq’s controversial 2015 novel at the Deutsches Schauspielhaus in Hamburg, Germany. The towering Edgar Selge stars in a gripping 120-minute monologue that imagines an Islamic takeover in France in the not-too-distant future.

On a nearly bare stage, Mr. Selge, 70, becomes Mr. Houellebecq’s antihero, François, a nihilistic academic who slowly learns to reconcile himself to a new regime of Shariah law.

At the back of the stage, the set designer Olaf Altmann places a massive rotating metal wheel with a hollowed-out cross at its center. Mr. Selge frequently climbs aboard, letting himself be tossed and turned by the revolving assemblage, as he narrates both the dramatic political events and the sordid details of his character’s pathetic existence.

At first glance, Mr. Selge, who recently starred in Ms. Beier’s messy production of “King Lear,” seems far too distinguished to play Mr. Houellebecq’s unsavory misanthrope. But the counterintuitive casting pays off, and Mr. Selge invests the character with just the right amount of bitterness, self-deprecating humor and charisma to make the performance, and Mr. Houellebecq’s intelligent and well-considered satire, work onstage.

The script, by Ms. Beier, the Schauspielhaus’s artistic director, and Rita Thiele, does a fine job of distilling the book’s 250 pages of crystalline prose. Oliver Reese’s adaptation of Günter Grass’s 600-page first novel, “The Tin Drum,” originally published in 1961, involves an even greater feat of compression.

At the Berliner Ensemble, the storied theater in the German capital that Mr. Reese has led since last season, the young actor Nico Holonics disappears into the role of Oskar Matzerath, the novel’s main character and one of 20th-century literature’s most memorable narrators: a 4-year old who decides to stop growing when the Nazis come to power and who spends the Third Reich banging incessantly on his toy drum and terrorizing the adults trying to curtail his percussive pastime with earsplitting and glass-shattering shrieks.

Mr. Holonics brings Grass’s epic to life on a scale that seems at once vast and intimate. Alone onstage battering his totemic drum, and looking the part of an oversize toddler in his waist-high shorts, suspenders and high socks, Mr. Holonics gives a seething, deeply unsettling performance as the stubborn, manipulative and wickedly funny protagonist.

In Volker Schlöndorff’s excellent 1979 film adaptation, which won the Palme d’Or at Cannes and an Academy Award as best foreign-language film, Oskar was played by the 11-year-old David Bennent, in an intense but largely wordless performance, amid Mr. Schlöndorff’s opulent and often surreal recreation of Grass’s hometown, Danzig (now Gdansk, Poland), under Nazi control. Mr. Holonics, alone on a nearly bare stage, needs to evoke that entire unseen world, and his mesmerizing performance succeeds utterly.

Like Mr. Selge in “Submission,” Mr. Holonics is invested in the production both physically and emotionally. Conjuring up the novel’s large cast of characters and its carnivalesque succession of hellish scenes, he quivers, shouts and fiercely drums. It is a headlong plunge into a dark psyche and an even darker world. For the duration of the intermissionless performance, it is bloodcurdlingly persuasive.

Like other state-funded theaters in the German-speaking world, the Berliner Ensemble uses its generous budget mostly to maintain a large, capable stable of actors who can throw themselves into different roles every night. But performers as capable and captivating as Mr. Habjan, Mr. Selge and Mr. Holonics can summon up a convincing, immersive theatrical world beneath a single spotlight.