OYSTER BAY, N.Y. — Raynham Hall, a historic house museum a few blocks from the bay that gives this hamlet on Long Island’s North Shore its name, has long been known as a nexus of activity during the American Revolution.

In the 19th century, the home’s owners welcomed visitors in, to see some of the relics and hear the tales of that period. For part of the 20th century, it was owned by the Daughters of the American Revolution, who told the story of how the British commander John Graves Simcoe made the house his headquarters while he and his Queen’s Rangers, an elite Loyalist unit, were garrisoned in Oyster Bay, in 1778 and 1779, and again in 1780.

Simcoe’s friend, the dashing British intelligence chief John André, is known to have visited him here. There are also the requisite ghosts said to be wandering around the 22-room house, not to mention a yarn (erroneously perpetuated in a state historic plaque still in front of the building) about Sally Townsend, the daughter of the home’s owner, Samuel Townsend.

The apocryphal story says that, while she was serving doughnuts to André and other officers at her family’s house, she got wind of the conspiracy with the American general Benedict Arnold to hand West Point over to the British, and was able to alert Gen. George Washington’s headquarters. (André was intercepted with incriminating papers and hanged as a spy in 1780, doughnuts having had nothing to do with it.)

But the great untold secret of this house wasn’t even known until the 1930s, when historians confirmed the existence of the Culper Ring — an American espionage network that extended from British-held New York, along the coast of Long Island, across the Sound and to Washington’s headquarters in Connecticut.

The man at the center of that ring, Sally’s brother Robert Townsend — code-named Culper Jr. — grew up in this house, and would spend much of his adult life here.

The Culper Ring has been having a cultural moment in the 21st century with the publication of several popular books, and an AMC series based on one of those books, “Turn: Washington’s Spies,” that ran from 2014 to 2017.

André, Simcoe and Robert and Samuel Townsend were all portrayed in the show. While the house itself was not depicted, there’s no doubt as to its significance. 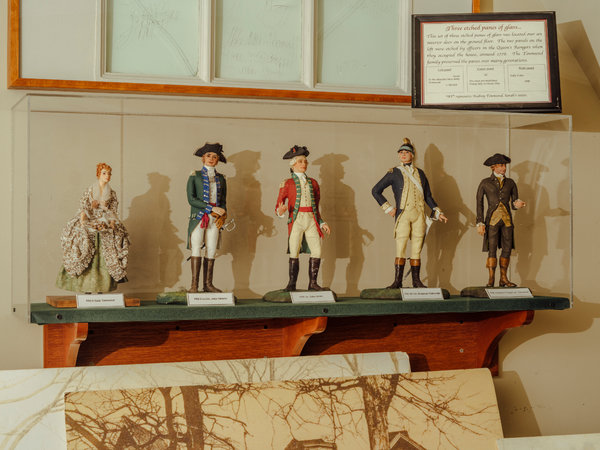 “Raynham Hall plays a central role in the story of George Washington’s spy ring,” said the historian Alexander Rose, whose 2006 book, “Washington’s Spies,” provided the basis for the TV series, for which Mr. Rose was also a producer. “A lot of the action centered around this house, which is beautifully preserved.”

Yet, while it hosts about 10,000 visitors a year — nearly half of them schoolchildren — the house, which is owned by the Town of Oyster Bay and operated by the nonprofit Friends of Raynham Hall, is relatively obscure.

Like a good intelligence agent, it manages to project its own false identity: When Samuel Townsend bought the house in 1738, it was a two-story, four-room structure. By the time of the Revolution, it had been expanded into an eight-room saltbox. In the 1800s, it was restructured into a Victorian manor with a tower and a stained-glass skylight. When the town acquired Raynham Hall from the D.A.R. in 1947, it removed the tower and rebuilt the facade of the home to resemble its appearance in the 1700s.

While the genuine-appearing Colonial front of the house was actually built during the Truman administration, the rear of Raynham Hall and the floorboards and walls are original. And the home’s rooms feature period items owned by the family — although visiting “Turn” fans expecting to find Robert Townsend’s cipher book or bottles of the invisible ink used by the ring to write messages, will be disappointed. Townsend did much of his snooping from his merchant family’s store in Manhattan, which he managed. He did not leave a paper trail — certainly not one that would lead straight to his family home.

“We were behind enemy lines here,” said Claire Bellerjeau, director of education at Raynham Hall Museum.

Interpreting the tools or products of intelligence work is a challenge for any museum that deals in espionage. “When anything is kept secret, it’s ripe for imagination,” said Jackie Eyl, youth education director of the International Spy Museum in Washington. “We try to fill in the gaps in the imagination.”

That museum tells the story of spying (including the Culper Ring) through many interactive exhibits. While Raynham Hall can’t duplicate that, it does have an inherent advantage over other museums.

“There’s something to be said for the authenticity of standing in a place where a figure of history actually stood,” Ms. Eyl said.

But why did these important figures in the Revolution’s clandestine history stand exactly here, in Raynham Hall?

“Long Island was a honeycomb of espionage,” explained Barnet Schecter, author of “The Battle for New York: The City at the Heart of the American Revolution.” Besides being an important source of food, fuel (in the form of wood) and forage for the British troops occupying Manhattan, he said, the island “was an interface between two enemy camps.”

Oyster Bay, on Long Island Sound, was a strategic location. Also, Samuel Townsend, Robert’s father and the owner of the house, was an ardent patriot, a member of New York’s Continental Congress who had been forced to pledge allegiance to the king following his arrest after the American defeat in the Battle of Brooklyn in 1776.

“I think the British wanted to keep an eye on Samuel,” Ms. Bellerjeau said.

If so, they were watching the wrong Townsend, although Robert, who visited the house frequently during the war, was only one of several spies under this roof: Ms. Bellerjeau has found a letter confirming that while he was at Raynham Hall, André also met with a mysterious American agent in the service of the British.

“We had a real nest of spies here,” she said with a laugh — the most famous of them having managed to remain a secret for nearly two centuries.

On her house tours, Bellerjeau shows laminated reproductions of maps, portraits and letters. But perhaps the most striking image is a sketch drawn of Robert Townsend by his nephew decades later.

After the war, the spy lived in this house, quietly and anonymously, until his death in 1838.

Wearing glasses and looking like a contented country barrister, Robert Townsend is shown in his nephew’s drawing at age 59 in 1813. He’s holding a book open to a blank page, a hint perhaps that the real story of his life had yet to be revealed.