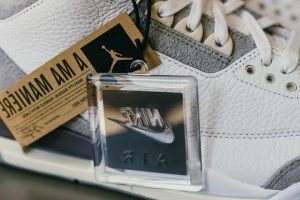 After dropping in the US in April, A Ma Maniére‘s Air Jordan 3 “Raised by Women” is set for an international release at European and APAC retailers in June. A trendy early pick for Jordan Brand‘s best collaborative sneaker of 2021, the A Ma Maniére x Air Jordan 3 “Raised By Women” is centered around two main pillars: an ultra-clean color scheme and a powerful, meaningful backstory inspired by Black women.

Any Air Jordan aficionado is likely familiar with the AMM AJ 3’s design at this point, but points of note for those less familiar include elephant print-less gray suede mudguards, artfully yellowed detailing that contrasts with an elegant mauve on the midsole, special branding on the tongue and a quilted silver satin collar lining. Under the Nike Air-emblazoned heel tabs, there’s even special printed messages from A Ma Maniére founder James Whitner‘s mother, done up in her own handwriting.

“By making [the Air Jordan 3 and its matching apparel] luxurious, this collection is something anyone can play into,” Whitner told HYPEBEAST ahead of the shoe’s first release in April. “The primary purpose was to make something for women to get really excited about, but also something dope that the fellas would want. [A Ma Maniére] is rooted in a luxury street experience, and we’re really attuned to that ethos — which enables us to design freely, without overthinking.”

Expect the A Ma Maniére x Air Jordan 3 “Raised By Women” to hit global Nike SNKRS outposts and select retailers come May 22. Its MSRP remains unchanged, as it’s priced at the international equivalent of $200 USD.