A Mysterious Autograph Hound’s Book Is Up for Auction 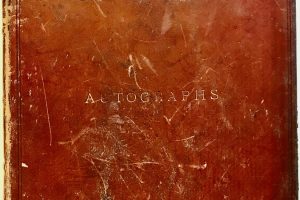 The little book is a relic from the years after the Civil War, when autograph-crazy Americans collected signatures, a central building block of identity before fingerprinting, Social Security numbers or credit cards. A jeweler named Lafayette Cornwell collected more signatures than most people did — 400 or so, starting when he was a teenager.

In time, eight presidents and several first ladies signed Cornwell’s autograph album. So did Mark Twain, Harry Houdini and Thomas A. Edison. For decades, well into his own middle age, Cornwell had a knack for turning up where well-known people were and persuading them to sign. Sometimes they did more than that. Herman Melville wrote a quote from Shakespeare. Oscar Wilde quoted his own poetry. John Philip Sousa wrote three measures of “The Stars and Stripes Forever.” Mary Todd Lincoln signed “Mrs. Abraham Lincoln,” which David Lowenherz, a collector and dealer, said was unusual. After her husband’s assassination, she usually just signed “Mary Lincoln,” Mr. Lowenherz said. 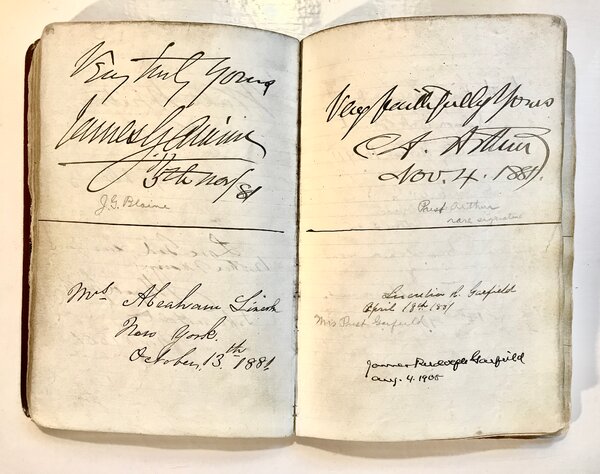 “Cornwell somehow ingratiated himself into so many different situations,” Mr. Lowenherz added. “It was unusual to get more than a signature. He must have said more than, ‘Mr. Melville, would you sign my book?’” Mr. Lowenherz plans to sell the Cornwell autograph album on Wednesday through the online auction platform invaluable.com. The presale estimate is $30,000 to $35,000.

When Cornwell approached the actress Sarah Bernhardt, she made a demand, to which he complied: She insisted that her signature be the last in the album, even though it was far from filled when Cornwell boarded her private rail car in 1911. “I write the last!” she had announced, according to Cornwell, who spoke to The New York Times for a 1927 article about the album. She signed the last page and then pasted that page to the inside back cover. “No one must write after me.”

The album began in the 1880s and ended in the 1930s, shortly before Cornwell gave it to a niece. How Cornwell organized the signatures in the book is as unclear as how he obtained so many — they are not in chronological order. Melville and the oil and railroad magnate Edward Stiles Stokes signed on the same day, but 12 pages apart. President James A. Garfield’s son put his signature beneath his mother’s — at least 20 years after she had signed.

Mr. Lowenherz attempted to unravel the mysteries of the album by creating spreadsheets tracking Cornwell’s travels. But for all the famous people Cornwell encountered, he himself remains a question mark. “Here’s a guy who’s so undocumented that it makes his ability to show up and be allowed in to get these autographs all the more astonishing,” Mr. Lowenherz said.

Still, Mr. Lowenherz traced Cornwell from Yonkers, N.Y., to Pueblo, Colo., where Cornwell ran a jewelry store. Apparently his specialty was watchmaking. A 1903 magazine published by a Colorado steel maker said he had “without question the largest repair trade west of Kansas City.” The magazine said Cornwell was also the assistant chief inspector for three railroads.

This helped him get around. When the Statue of Liberty was dedicated in New York in 1886, Cornwell was there — and the French sculptor Frédéric-Auguste Bartholdi, who had designed the new monument, signed his album.

“He was a little like Zelig,” Mr. Lowenherz said, referring to the nondescript title character in a 1983 Woody Allen film whose “chameleon disorder” enabled him to resemble the people he encountered.

“How did he get into these places? What has been fleshed out is he obviously had an interest in politics. And it could build on itself: ‘President Grant signed it in 1880. Would you mind signing it?’ ‘Oh, sure, young man,’” Mr. Lowenherz went on. “But by the end of it, he wasn’t a young man anymore.”