A New Opera Season: The Week in Classical Music 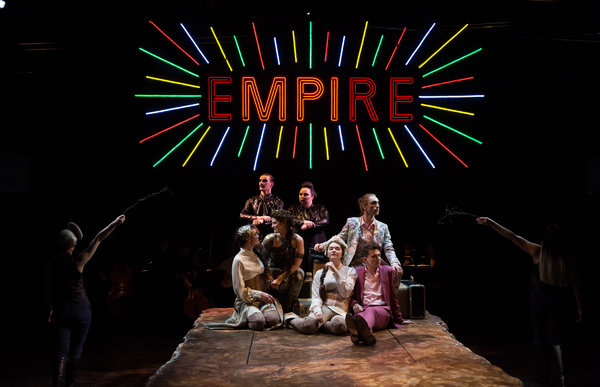 Hi there! The Metropolitan Opera announced its 2019-20 season on Wednesday, and our writers have chosen some highlights. And Corinna da Fonseca-Wollheim took the measure of Daniel Harding and the Royal Concertgebouw Orchestra of Amsterdam.

In sadder news, the composer Dominick Argento, who spent much of his life in Minnesota, died at 91. A Facebook friend told me Argento was close with Mary Ann Feldman, the Minnesota Orchestra’s longtime program annotator, who died this week, too. “A sad week for the classical music community in the Twin Cities,” my correspondent wrote.

Argento’s song cycle “From the Diary of Virginia Woolf,” written for Janet Baker, is one of his finest achievements. Enjoy it. ZACHARY WOOLFE

The director Mary Birnbaum, in her intriguingly updated production of Purcell’s “Dido and Aeneas” at the Juilliard School, gives us an ambiguous ending. The staging posits that Dido doesn’t die of heartbreak, but by self-immolation, after the public humiliation of being abandoned by her lover, Aeneas. (After all, what kind of queen falls hopelessly for an enemy?) But Ms. Birnbaum further complicates things: Her Dido storms off at the end and seems not to die at all.

It’s a difficult concept, but the cast, dressed in modish, stylized costumes, embraced it and brought lots of youthful, ardent singing to the music, backed by the sensitive period-instrument Juilliard415 ensemble, with Avi Stein conducting. (It runs through Sunday.) The mezzo-soprano Shakèd Bar was a dark-toned, calculating Dido, a role she performed in 2017 in a semi-staged performance with the Jerusalem Baroque Orchestra. The baritone Dominik Belavy, in a sleek three-piece suit covered with embroidered flowers, was an impassioned Aeneas. I must mention Chance Jonas-O’Toole, a sweet-voiced tenor whose small role as a sailor was fortified with a couple of inserted, thematically appropriate Purcell songs. ANTHONY TOMMASINI

The Hebrew word “mar’eh,” which means “face” or “sign,” is the revealing title the composer Matthias Pintscher gave his 2011 work for violin and orchestra, which he led with the New York Philharmonic on Thursday. In this 23-minute score, the violin has long passages that seem to be suggesting the myriad auras, or faces, of sounds.

Renaud Capuçon was a spellbinding soloist, as in this excerpt from a 2015 performance with the Berlin Philharmonic, with the composer conducting. To open the program in New York, which runs through Saturday, Mr. Pintscher led a sumptuous, wildly animated yet cagey performance of Ravel’s “Alborada del gracioso.” He ended with a riveting account of Stravinsky’s “Firebird,” a fresh, startling account that conveyed both the plaintive beauties and slashing rawness of this 1910 score. ANTHONY TOMMASINI

On Thursday at the Miller Theater at Columbia University, members of Yarn/Wire and the International Contemporary Ensemble gathered for a Composer Portraits concert devoted to works by Wang Lu. The program began with the title work from her recent album, “Urban Inventory.” That suite incorporates some prerecorded street scenes, captured by the composer while visiting Xi’an, the city in China where she was born.

The playing at Miller was sharp, particularly in the 2008 chamber work “Siren Song,” which includes passages of acidic squall, as well as pools of melodic reverie. Yet in other works, the players’ acute emphasis on more striated textures occasionally seemed to lose sight of a fine balance between rupture and reflection that can be heard in this composer’s music — as in the final movement of “Urban Inventory,” during which traces of a recording by the pop singer Yang Yuying can be heard. SETH COLTER WALLS

On Wednesday, a different sort of pop-classical meeting came during Andy Warhol’s 1966 film “Hedy,” which screened as part of a triple feature at the Whitney Museum of American Art, currently showing a Warhol retrospective.

Though the film progressed with the same long-take style of other Warhol moving-image works from the period, “Hedy” also employed interstitial music during its scene transitions. The wildly pulsing drone music that could be heard offstage as Warhol’s camera zoomed in and out was immediately recognizable as the Velvet Underground.

The film has no traditional credits, but the Warhol Museum cites work by Underground members Lou Reed and John Cale as part of “Hedy.” In his book “Andy Warhol’s Ridiculous Screenplays,” Warhol collaborator Ronald Tavel remembers the entire group as being present at the Factory during the shoot — though Warhol “amazingly, unforgivably” never managed to capture footage of their playing in the film.

Mr. Tavel cites the composer La Monte Young as a likely influence on the group’s playing in this performance, though the forceful music for the film also brought to mind some experiments conducted outside of Mr. Young’s Theater of Eternal Music — including Mr. Cale’s 1965 guitar solo “Summer Heat,” as well as a later collaboration with Tony Conrad, “Dream Interpretation.” SETH COLTER WALLS

I made a point of catching a set by the saxophonist and composer Caroline Davis last Saturday at the Greenwich House’s “Sound It Out” series. That was a priority, thanks to the compelling lead single from her next album, “Alula,” which is forthcoming from New Amsterdam Records. Over the three-minute span of “Wingbeat,” you can hear Ms. Davis’s talent for deriving long, dizzying motifs from smaller melodic cells.

At Greenwich House (as on the forthcoming album), Ms. Davis was joined by the reliably outstanding keyboardist Matt Mitchell. But since the drummer on the recording, Greg Saunier, had his own gig on Saturday — uptown at the Ecstatic Music Festival — Ms. Davis’s Greenwich House trio included Dan Weiss, some luxury backup casting. This group made a thrashing impression, suggesting both the strength of the compositions on “Alula” as well as the significant potential for additional works by this configuration in the future. SETH COLTER WALLS