A New Time for Christian Marclay

HUDDERSFIELD, England — In the grand Victorian auditorium of the Huddersfield Town Hall, a rehearsal for a world premiere was in progress. With 20 pianos crammed in, the space looked much like a musical showroom — except for the pianists engaged in a bizarre sequence of gestures. One lay on the floor beneath her piano, trying to play the keys upside down. Another was balancing precariously on his stool, as if he were about to swan dive. The room echoed with fusillades of notes, plus the occasional elegant chord.

At the front, the artist Christian Marclay was standing sentinel, head cocked in concentration. He didn’t seem displeased. “Definitely better than it was,” he said when the performers paused for feedback. 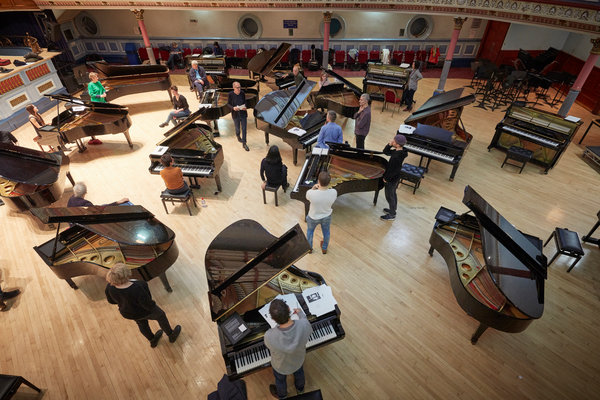 For those who know Mr. Marclay primarily as a visual artist, his residency at a contemporary music festival in this postindustrial northern town might come as a surprise. His masterwork “The Clock,” a mesmerizing 24-hour montage of film clips that reference time, each synchronized to the “real” second, had art lovers lining up around the block when it debuted at the White Cube gallery in London in 2010. Many thousands of people have seen it as it traveled across the world, making stops in Yokohama, Japan; Istanbul, Moscow, New York and San Francisco, among other places. (It is currently back in London, packing them in at Tate Modern).

But Mr. Marclay’s work has another facet: music.

“The thing about ‘The Clock’ is that, in terms of my work, it’s an outlier,” he said in an interview. “Music is really my thing. It runs through almost everything I’ve done.”

Taking its cue from that obsession, the Huddersfield festival has appointed Mr. Marclay as composer in residence, commissioning the new work for 20 pianos as well as showcasing pieces from a catalog stretching back over 35 years. A pop-up gallery space — situated, somewhat surreally, next to a stall selling underwear in the middle of the town market — is exhibiting graphic scores and videos of the artist performing as an avant-garde DJ in New York in the early ’80s, scratching or smashing records and engaging in punky free improv sessions. Later in the week, two longtime collaborators are set to fly in: the Sonic Youth guitarist Thurston Moore and the vocalist Shelley Hirsch.

Pointing out that he has no classical training beyond a few weeks of piano lessons and cannot read music, Mr. Marclay seemed unsure about describing himself as a composer. “I prefer to call myself an artist,” he said. “Artist in residence — that’s what I’ve been saying.”

Few people since John Cage and the Fluxus artists of the 1960s have been so fascinated by the divide between new art and new music. For Mr. Marclay, there is often no divide at all. In 1985, he produced a record with no protective packaging, so that visible scratches and fingerprints would intrude on the listening experience. A few years later, he began cutting up album covers to make droll Rauschenbergian collages, pasting Tina Turner’s legs onto Herbert von Karajan’s torso — a visual analog to musical sampling and remixing.

“He’s absolutely in that New York Cage tradition,” the composer and broadcaster Robert Worby said of Mr. Marclay, “but he pushes things all the time: using pictures as musical scores, asking musicians to respond to video imagery. He finds continuity in discontinuity.”

The festival’s opening night featured a raucous British premiere of Mr. Marclay’s 2016 “To Be Continued,” the score for which is a 48-page book of cartoons featuring noisy sound effects (“MMMMRRR,” “PLINK! PLONK!”). It was followed by the 2003 work “The Bell and the Glass,” Mr. Marclay’s first use of video to inspire performers. A tribute to Marcel Duchamp, it mingles footage of Duchamp’s artwork “The Bride Stripped Bare by Her Bachelors, Even” with film of the artist talking about it; the musicians are asked to imitate Duchamp’s singsong delivery.

Mr. Marclay said he was particularly looking forward to a rendition of his 2009 piece “Ephemera,” which will be played by Steve Beresford on the organ, the first time it has been attempted on the instrument. It, too, is a collage: A jumble of magazine clippings, advertisements, candy wrappings and album covers collected by the artist over many years and reprinted in a thick booklet, it contains almost no conventional notation.

Mr. Beresford said his plan was to plan as little as possible. “It’s a score for an improviser,” he said. “There are clues — photos, colors, snippets of music — but I don’t want to make it too literal.”

Mr. Marclay said: “I’m intrigued by what it will sound like. It genuinely is different every time.”

Even by the standards of experimental music, his new work, “Investigations,” offers the 20 pianists some intriguing challenges. A month ago, each performer received a box containing 100 black-and-white photographs culled from old record covers, publicity stills, beginners’ guides and the like. The images are cropped so that only hands and piano keys are visible; it is the performer’s task to search for clues about the music before trying to restage each photograph. “Physical posture must be re-enacted,” the instructions severely note. The images are shuffled before each performance.

One pianist, Sarah Nicolls, said that she was delighted by the open-endedness of “Investigations,” but also mildly anxious. She pointed to a photograph of a woman engaged in what looked like a virtuosic riff, her hands a milky blur.

“Lord knows how I’m going to interpret that one,” Ms. Nicolls said. “Be very loud, probably.”

When the time came for the performance, Ms. Nicolls and her 19 colleagues made it seem easy. The pianists filed out, carefully arranging their sheaves of photographs on each gleaming black instrument. Working at their own pace, they solemnly replicated the gesture in front of them — a flamboyant trill in the manner of Arthur Rubenstein here, a leg up on the keyboard, Jerry Lee Lewis-style, there. They moved on to the next, and the next: variations on a theme, in a sense.

Fragments of music drifted through the air. A snippet of “Take the A Train” melted into something that might have been Ravel. A sustained high note was answered by a plangent twang from across the room. Every so often, a pianist stood up, took another by the elbow and silently requested assistance in staging a photograph where more than one pair of hands was visible.

Somewhere between dance ritual and a dadaistic art installation, the piece was funny, and oddly tender — a ghostly invocation of performances past and performers long since dead. (It was also, perhaps, an artist’s sly revenge on those abortive piano lessons.)

When the last pianist finished, it was a few seconds before the audience realized that the piece was indeed done. As the lights came up, Mr. Marclay materialized from the shadows, blinked and bowed stiffly. A smile was just about discernible on his lips.