Home » Entertainment » A Surprisingly Sweet Noodle Dish for the Holidays

A Surprisingly Sweet Noodle Dish for the Holidays

In “One Good Meal,” we ask cooking-inclined creative people to share the story behind a favorite dish they actually make and eat at home on a regular basis — and not just when they’re trying to impress.

When the New York-based cookware brand Great Jones launched in November, it sold what had been projected as a month’s worth of pots and pans in the first two days. Part of the appeal was the affordable price — the entire five-piece set costs $395 — and part was the stylish aesthetic, with Dutch ovens coming in broccoli green, mustard yellow and macaron pink. “There are a lot of fashion influences in the color,” says the brand’s 28-year-old co-founder Sierra Tishgart. “We wanted the stainless pieces to look like jewelry. A Celine bag informs the shade of our blue.”

As Tishgart entered the holiday season, she began using her line’s Deep Cut — a cross between a skillet and a sauté pan — to make her mother’s kugel, the Jewish noodle casserole she ate every year as a girl growing up in Philadelphia. “There’s a cup of sugar in the recipe,” Tishgart says. “When she put it down on the table, whether it was for Thanksgiving or a Hanukkah meal, it was always part of the savory course. As a kid, it was the best thing ever because it was like getting to eat dessert before dessert.”

The recipe has been in the family for 40 years; you’ll know you’ve made it right if your kugel comes out of the oven with crispy edges. “It’s both creamy and crunchy,” Tishgart says, entering a kind of Proustian trance. “You could totally eat it with a spoon.” 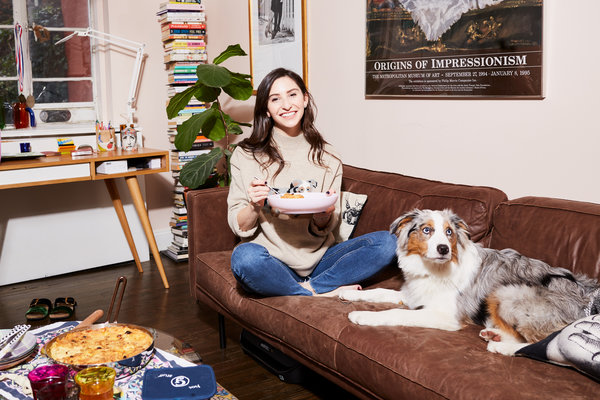 Cinnamon (a few sprinkles to taste)

2. Mix together cream cheese and sugar, using an electric mixer (or some muscle). Add eggs and milks and continue mixing.

3. Place noodles in a 10.5-inch ovenproof deep sauté pan or casserole dish. Add liquid mixture. Add raisins and gently push down below surface of liquid. Refrigerate casserole for a few hours or overnight before baking.

4. Bake for about 1 hour in preheated oven at 350 degrees. Remove from oven and sprinkle with cinnamon before serving.