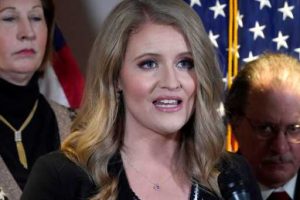 It’s been weeks since Amy Coney Barrett’s Supreme Court nomination event at the White House was dubbed a superspreader event after multiple political officials contracted COVID-19 back in September — including President Donald Trump and First Lady Melania Trump. A few days later, the president was hospitalized at Walter Reed National Military Medical Center and in need of further medical attention due to his increasingly worrying symptoms. Now, the White House has reached an eerily similar situation with Mrs. Trump’s White House holiday party last Friday. With Trump’s lawyers Rudy Giuliani and Jenna Ellis testing positive days after the event, this could be the next superspreader to affect even more officials in Trump’s circle — and a lot of staffers at the White House are not happy, to say the least.

Per Axios, Ellis informed associates that she tested positive for COVID-19 after Friday’s holiday party. Since then, Giuliani, who has been Trump’s right-hand man during his  election legal battles has been hospitalized after testing positive. One worried staffer who attended the party told the publication, “People brought their families.”

Though Stephanie Grisham, spokeswoman and chief of staff, previously told SheKnows that face mask coverings would be required and readily available to all attendees, Axios reported that Ellis was seen not wearing a mask throughout the indoor event.

CNN anchor Jake Tapper shared a text he received from an attendee on Twitter.

“It’s absolute insanity the White House continues to host holiday parties, with maskless attendees,” the text to Tapper read, “No one should be surprised Jenna Ellis tested positive after attending a Christmas party It is almost certain there will end up being additional administration outbreaks as a result of these parties.”

Ellis’ appearance at the party was frustrating for some people in more ways than one. “She had the nerve to show up at the senior staff Christmas party knowing everyone was furious with her for constantly stirring Trump up with nonsense,” a senior administration official told the publication.

Before you go, click here to see quotes that prove Melania Trump is a lot like her husband.

END_OF_DOCUMENT_TOKEN_TO_BE_REPLACED

END_OF_DOCUMENT_TOKEN_TO_BE_REPLACED
We and our partners use cookies on this site to improve our service, perform analytics, personalize advertising, measure advertising performance, and remember website preferences.Ok