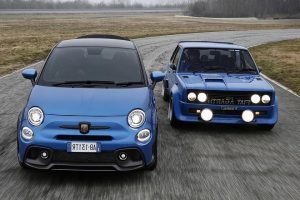 The automotive crowd loves a pocket rocket, and it also loves nothing more than a well-considered homage — so welcome to the Abarth 695 Tributo 131 Rally, which pays its respects to the much-adored Abarth 131 Rally that turns 40 this year.

Limited to just 695 units globally, this particular car is also a very rare piece of automotive history. It comes in a bicolor three-layer “Blue Rally” glossy hue, reminiscing the color that made the original 131 Rally so popular in the 80s, and as it’s an Abarth car, plenty has been done to take this from a Fiat 500 to the mini hot hatch that it is.

For example, the 1.4 T-jet engine offers up a punchy 180 HP and 250 Nm of torque at 3,000 RPM, sending the car to 62 MPH in a respectable 6.7 seconds, before hitting its 140 MPH top speed. While these figures might not stack up against hot hatches, it’s more about the attitude and feeling the car conveys and makes you feel as you chuck it around B-roads.

To help it cope, the car has Koni FSD shock absorbers at both axles and Brembo brake calipers at the front and rear, while a Record Monza Sovrapposto exhaust system with four pipes sets out the rear aesthetic. 17” diamond-cut rims, a Spoiler ad Assetto Variabile system that can be positioned in 12 different ways, and various “easter eggs” also appear, adding the silhouette of the original 131 Rally engraved on the lower part of the car door, on the Alcantara dashboard and on the headrests of the Sabelt seats.