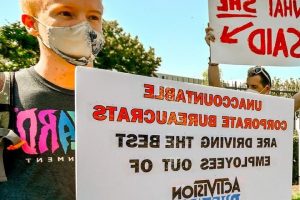 Following months of controversy revolving around its workplace culture, sexual harassment and gender discrimination, Activision Blizzard CEO Bobby Kotick has finally announced that a series of policy changes are on the way.

Announcing the end of ist required arbitration over the employees’ claims, the company’s Kotick stated in an email to employees yesterday that Activision Blizzard will be implementing a series of changes to improve its work environment and culture, including a “zero-tolerance” harassment policy. “Being welcoming and inclusive, in the context of our workplace, is crystal clear,” Kotick wrote. “We will still passionately debate ideas, employ healthy skepticism when appropriate, and demand excellence and rigor in all of our pursuits – but we will always treat each other with dignity and respect.”

Activision Blizzard is now planning to increase its percentage of female and nonbinary employees by 50% over the course of the next five years, backed by a $250 million USD pledge in order to “accelerate opportunities for diverse talent.” More transparency will be provided in regards to pay equity, and Kotick himself has also asked the company’s board to reduce his pay to $62,500 USD — a significant reduction from a previously approved pay package of $155 million USD — to ensure that “every available resource is being used in the service of becoming the industry leader in workplace excellence.”