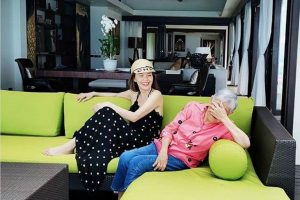 The 52-year-old posted a photo of herself sharing a laugh with her stepmother, Madam Wong Pong Chin, whose face is obscured in the picture.

Tay, who has long referred to Madam Wong as her mother, wrote in Chinese: “Mummy, happy birthday. I hope you stay healthy and happy every day. Thank you for ensuring that I eat well, dress well and sleep well.”

She added in English: “You’re (an) amazing woman, thanks for raising me.”

Tay’s biological mother died in an accident when she was three. She was the youngest of six children. Her father later remarried and had a daughter with Madam Wong.

In a 2017 interview with The Straits Times, Tay said of Madam Wong: “She gave a lot of love to our family, so we all respect her a lot. So it’s no difference to me that she’s not my blood mum.”

She did not disclose the exact age of her stepmother, whom she calls the “most beautiful woman”, but said she is in her 80s.

Tay also jokingly chastised herself as a “lazy daughter” who has not inherited Madam Wong’s “first-class cooking skills”.

The star looks forward to the day she can travel again with her family, when border closures caused by the Covid-19 pandemic are lifted.

END_OF_DOCUMENT_TOKEN_TO_BE_REPLACED

END_OF_DOCUMENT_TOKEN_TO_BE_REPLACED
We and our partners use cookies on this site to improve our service, perform analytics, personalize advertising, measure advertising performance, and remember website preferences.Ok