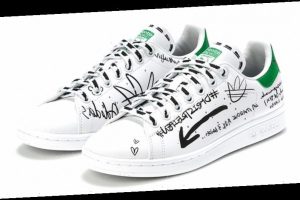 adidas Originals has been using the Stan Smith‘s clean base for a number of bold reworks as of late, releasing the Kermit, “Christmas Monster,” and this vegan iteration all in the past few months. Now, the Three Stripes has released another brave offering, this time around tagging up the sneaker with graffiti that’s inspired by the adidas Originals archive and Stan Smith motifs.

Each side is covered in what looks like marker pen doodles, gracing the “Footwear White” vegan leather uppers with details such as the Trefoil logo, the “La marque aux 3 Bandes” statement, its Herzogenaurach, Portland, and Shanghai HQ addresses, and more.

For example, “Stan” and “Smith” appear not just in the usual form on the heel tabs alongside a Trefoil logo, but also as graffiti tags on top. The shoe brand and the model itself has been added to the medial side alongside an arrow, while more arrows can be found on the lateral, too. The toe box has love hearts on it, the laces are semi-outlined, and the tongue stitching has also been highlighted in black, somewhat framing the OG Stan Smith tongue stamp. Last but not least, the shoes are asymmetrical, meaning you’ll find a different print design on either side of both feet.

Take a look at the adidas Originals Stan Smith above, and pick up a pair for yourself from HBX now, where the shoe retails for $139 USD.

In case you missed it, here is a closer look at the adidas YEEZY BOOST 380 “Yecoraite.”
Source: Read Full Article

END_OF_DOCUMENT_TOKEN_TO_BE_REPLACED

END_OF_DOCUMENT_TOKEN_TO_BE_REPLACED
We and our partners use cookies on this site to improve our service, perform analytics, personalize advertising, measure advertising performance, and remember website preferences.Ok