Home » Entertainment » After ‘For Sama,’ a Syrian Family Finds Refuge in London

After ‘For Sama,’ a Syrian Family Finds Refuge in London 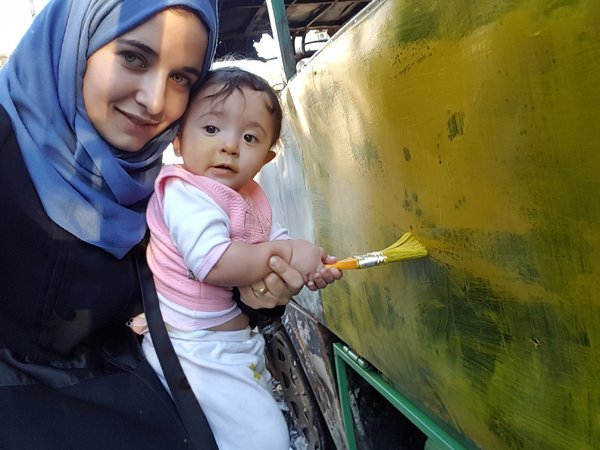 This article contains spoilers for the documentary “For Sama.”

How do you get viewers to care — really care — about things happening on the other side of the world?

This was a question the journalist and filmmaker Waad al-Kateab and her co-director Edward Watts grappled with as they started sifting through 500 hours of footage of the Syrian uprising. Starting in 2011 as a university student, al-Kateab had filmed her life in Aleppo, recording the protests and violence that surged through the city (her footage and reports occasionally ran on Britain’s Channel 4 during the Syrian civil war).

She also documented her wedding day, dinners with friends and her pregnancy, but “I was clear that I wanted the film to be more about the city,” she said in a recent interview. “I didn’t want to be the center of the story.”

But the filmmakers soon realized that a documentary about the mundane as well as the devastating moments of civil war, a film that felt like al-Kateab taking viewers through five years of her family’s life, would create a powerful portrait of a culture’s destruction. “For Sama,” which debuted this week on PBS’s Frontline and is available to stream on the Frontline website and YouTube, is startlingly intimate, combining al-Kateab’s footage with her frank narration about the conflict and her fears surrounding how it will affect her family. (“What a life I’ve brought you into,” she says about her daughter at one point. “Will you ever forgive me?”)

The film closes with al-Kateab, her husband, Hamza, and their daughter Sama safely escaping Aleppo and arriving in Turkey. A second daughter, Taima, is born soon after. Since then, the family has claimed asylum in England, and today they live in London.

“For Sama” had a theatrical release earlier this year, but al-Kateab said over the phone that it was important for her that people could now watch the film in their own homes, and wonder, “What if this happened to me? To the place that I love?”

She also discussed how she hopes the film and the campaign Action for Sama, which raises money to support humanitarian workers in Syria, will keep the ongoing Syrian conflict in the public eye, how her daughters saved her and her husband and what the family’s day-to-day life looks like now. These are edited excerpts from the conversation.

The film is presented as a love letter to your daughter, Sama, but it also feels like an act of resistance, in that you were filming protests the regime claimed weren’t happening.

A lot of people have told me, your activism is something, and the film is something else. But for me, it’s really the same. I would not do this if I wasn’t an activist.

At the beginning of the filmmaking, I was so desperate, and I didn’t know if the film would create any change, and I didn’t want to have any expectations, especially when I had just left [Aleppo]. I lost everything. I didn’t know if I could stand up again. I started to do the film because I felt like it was the only way for me to keep going. I did it just to be a record, even to put in one library and to say this is one story of Syria.

Our hope is that the film is not just a film. People can watch it, but also it’s a tool for change. It can push people to do something. It will not be just something people watch and forget. That is also why we set up Action for Sama, a campaign to stop the targeting of health care facilities in Syria.

Why did you and your husband, Hamza, decide to share so much of your lives with the film’s audience?

Really, I feel like people know very few things about what happened with us. It’s five years. I have like 500 hours of footage. You’ve seen just 95 minutes. So people may feel like they know us really well, but this is just the general things that anyone could know about our life as people who lived in that situation.

People know that people bring children into situations [like the Syrian uprising], but they have thousands of questions about why people do that, so for me, everything personal is really already public.

Stories become more resonant when there is a character to connect with, rather than just facts.

There’s a fear in the whole world about refugees and people who are the other. The film is just fighting this in a very simple way, in that you feel that you know these people, and you care about them. You need them to be like part of your life, or you need to be part of their life.

You and your family are now living in London. How was your experience getting asylum?

Everything was easy for us, not like for other people. I know many people stuck inside Syria now, or in the camps, or in Turkey.

I had been working with Channel 4, so I had access to a visa to come to the U.K. After one year of living in Turkey, in May 2018 we came to Heathrow Airport, and claimed asylum there.

One thing, though, was that when we came to England, I couldn’t bring my second daughter, Taima. She was almost 1 year old, and she had no papers. The only paper I had was from the hospital saying I had had a child, but they didn’t even put the name of the child. I tried to go to the Syrian embassy for help, but they wouldn’t help, because Hamza was wanted by the regime [for his role in the uprising].

My passport, Hamza’s passport and Sama’s passport were almost expired, and once that’s happened, there’s no option to get another passport, so I had no option but to leave. So I left Taima in Turkey for five months until we were granted asylum, and I could bring her to England on a temporary travel permit from the U.K. I try not to think about that time too much. I’m just glad that nightmare is finished.

Do you and your family hope to return to Syria?

Of course. Not just because it would mean seeing my home, but because for all of us who stayed till the end, being out of Syria is not something that we want. But we had no other option.

We don’t want to be taking money from aid. We want to work. There are a lot of things we can do — Hamza is a doctor. But as refugees, there is nothing stable at all, and you have to just find individual ways to survive.

What has your experience of living in London been?

Moving here didn’t feel like the perfect decision at the time, especially with Brexit. But it has been a very different experience to what I expected. People have been so kind. After my neighbors watched the film on Channel 4, they left great messages outside of my door the next day, it was just so lovely.

For me, Aleppo and Syria will always be my first home, but I really feel like here in England I have a second home.

How connected do you still feel to Syria and the changing political landscape over there?

Making and promoting the film has been good in that you feel like you’re not separate from what’s happening. You’re still fighting and doing something even if you’re out [of Syria]. Even though I’ve had to leave, this has stopped me feeling hopeless.

The film is a chance for Syria to be back in the news, when everyone feels like the world is ignoring what’s happening in Syria. This is our story, and seeing people still caring and engaged, it’s an amazing feeling. With everything that’s happening in Syria, you need all the time to keep pushing back to the same one line: Nothing has changed.

What are your and Hamza’s work plans going forward?

I got a scholarship for university for a masters in media communication and development. I haven’t studied anything now for like seven years, and I was doing marketing before, which is something totally different.

It’s so important for us to think about how media and journalism could be developed in places like Syria. And also, it’s not just that the world was watching us through their perspective, but also we are watching the world from our perspective. There are so many things I want to do, but I can’t complain. That’s one of the advantage of what we went through: You can’t complain.

Hamza is working for a company that provides banking in conflict areas. Next year he will do a masters in public health.

How are the girls enjoying London?

Sama is 4, and Taima is 2 and a half. They’re enjoying everything so much. They switch between English and Arabic — Sama has started correcting our spelling. And she has a British accent, I’m like no, please no! [Laughs.]

Last week was Halloween, and they were celebrating Halloween for the whole month, oh my god. They slept in their witches’ dresses for the whole week.

We had a really hard time after we left [Aleppo] with Sama. She had nightmares. But she’s doing really, really well now. Children surprise you. I’m sure that me and Hamza stand up now because of them. You need to find hope everyday when you wake up, and with children you just keep going for them.