After Homelessness, ‘I Just Wanted Security’

Two years ago, Maria Martins faced a tough decision: stay in a humanitarian job that gave her purpose, or claim a home of her own after an extended period of homelessness?

At the time, Ms. Martins, an AmeriCorps volunteer, was working with a Federal Emergency Management Agency team in Fort Worth, Tex. She and her logistics unit were shipping meals, water and supplies to areas affected by Hurricane Matthew.

“I wanted to help people,” Ms. Martins recalled. But halfway into her assignment, she learned that she had been approved for an apartment in the Bronx, offered through a federal government program serving the lesbian, gay, bisexual and transgender community.

Ms. Martins decided to leave AmeriCorps — forfeiting a $5,000 educational award and possible job opportunities — to return to New York and make a home of her own.

“I just wanted security,” she said in an interview last month.

Her decision stunned her new friends on the FEMA team.

“Most people there were college graduates, had close family, never been homeless,” recalled Ms. Martins, now 23. “It was kind of hard to say, ‘I’m leaving,’ and to explain my past and why, if I don’t take this, what my alternatives are.”

The narrowing of those alternatives, she said, started in 2011. She was attending St. Francis Preparatory High School, and a fellow classmate decided to transfer to Harvey Milk High School, a Manhattan public school intended to serve lesbian, gay, bisexual and transgender youth. The friend urged Ms. Martins to apply, too.

The decision to transfer there was the right one for her, she said. Ms. Martins found a welcoming, liberating place, where she excelled in class, forged new friendships and met a girlfriend.

“The community that was there was amazing,” Ms. Martins said. “When I got home, I shut that off.”

Outside her school was a stark contrast. She came out to her family, and relationships turned adversarial.

After graduating in 2013, Ms. Martins was not sure what to do. She enrolled at Queensborough Community College and took an overnight delivery shift at Insomnia Cookies. Juggling a job and college became too burdensome, and Ms. Martins dropped out.

“I had to make money,” she said. “I couldn’t rely on anyone but myself.”

She was living in Brooklyn with her partner until their relationship dissolved, and Ms. Martins, without support from her family or the ability to afford a new home, entered the shelter system. In August 2014, she was accepted into a transitional living facility operated by Green Chimneys, which provides resources to homeless youth.

She lived there for a year and a half, working and saving money, but made no grander plans for her future. As the end of the 18-month program at Green Chimneys drew near, Ms. Martins signed up for AmeriCorps, hoping it could give her a fresh start and wider prospects.

“This bubble, this shelter, is about to be popped, and I need to really correct myself,” she recalled thinking. “It’s a really mean world out there. It’s cold and you don’t always get help.” 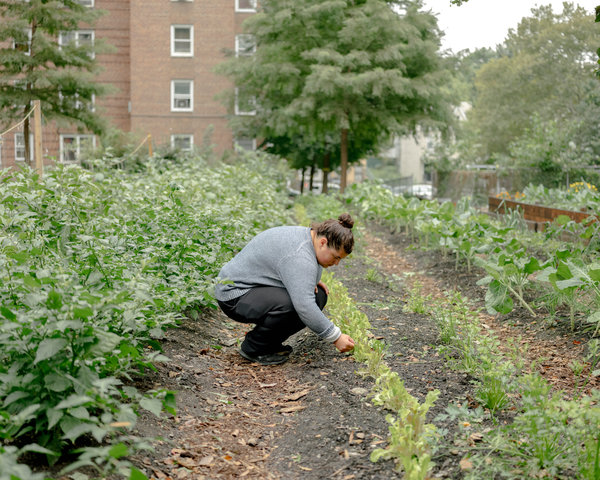 AmeriCorps gave her a place and purpose for six months, but when the offer for a government-funded apartment in the Bronx came, it felt like an option with a more fortified foundation. So she took it.

After leaving Texas, Ms. Martins settled into her new space, found a job at a hair salon and took part in a photography internship through the Hetrick-Martin Institute, which helps lesbian, gay, bisexual and transgender youths. On its job board was a flier for Green City Force, an AmeriCorps program that recruits people from low-income communities to train for jobs in energy.

Ms. Martins zeroed in on the AmeriCorps connection and joined Green City Force in May 2017. For nearly a year, she served in its Urban Farm Corps and discovered new career avenues, though many required a driver’s license.

In December, the Community Service Society, one of eight organizations supported by The New York Times Neediest Cases Fund, paid for Ms. Martins to receive driving lessons and take her road test using $250 from the fund. She failed her first road test but plans to retake it soon.

She is pursuing an associate degree in horticulture therapy at Bronx Community College, a field that excites her. In five years, Ms. Martins hopes to have a lush farm and a thriving business of her own.

This month she moved into a new apartment, which is supportive housing, but she feels she is moving toward independence. And she and her girlfriend are newly engaged.