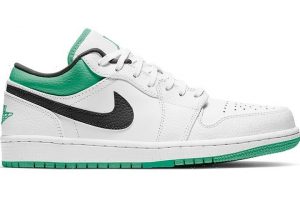 Tons of momentum has been picked up by the Air Jordan 1 Low this season due to the various teasers going around of its collaboration with Travis Scott and fragment design, but while fans wait for those to officially launch, it’s adding a handful of GR pairs to its catalog. One is this Boston Celtics-friendly Air Jordan 1 Low “Lucky Green” makeup that has just been revealed by way of official imagery.

Simple in style, the kicks start off with bright white leather materials that form most of its upper half, the quarters and mid-foot being smooth in feel while the overlays are done up with tumbled textures. Laces and synthetic tongues follow suit with the angelic finishes while the side Swooshes and sock liners deliver stark black trim. Its titular shade is by far the highlight as it is planted onto the collars, Jumpman insignias on the tongues as well as the ball-and-wings logos that are embroidered into the heels. There’s no evidence of coloring on the midsoles, but the outsoles keep the theme going with its “Lucky Green” paint job.

These dropped early via Nike Japan and have now sold out, but a stateside release will likely go down in the coming months.