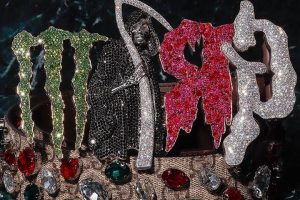 Known for crafting some of the most striking iced-out pieces for the biggest stars in the world, Alex Moss New York has now put together a one-of-a-kind piece for A$AP Rocky. Aside from personally commissioning the piece, the Harlem rapper also designed the GRIM Belt Buckle estimated to be worth $322,000 USD.

Work on the piece started with a conversation between Rocky and famed jeweler Alex Moss, Rocky wanted to make a belt buckle like nobody has ever done before using the highest quality material on Earth and impeccable craftsmanship. The buckle that spells out GRIM, the rumored title of A$AP Rocky’s fourth studio album, utilizes lettering taken from R. L. Stine’s Goosebumps children’s horror fiction novels, Monster Energy’s logo, and a grim reaper motif.

The GRIM Belt Buckle took four months to complete and was painstakingly crafted by hand in New York City. The buckle is made of solid 18k white gold and set with VVS natural white diamonds, green diamonds, black diamonds, and natural rubies. Finishing off the attention-grabbing extravagant look of the piece is a Gucci monogram belt studded with large colored stones that serves as the strap attached to the belt buckle.