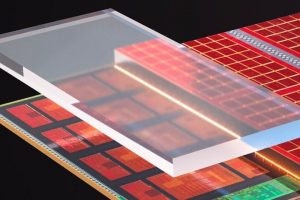 The wait is finally over: AMD has just introduced its first-ever desktop Ryzen CPU with its highly-anticipated 3D V-Cache technology.

Unveiling the new processor over at CES 2022, the company will be debuting the new feature with the Ryzen 7 5800X3D, which it claims is 15% faster than the Ryzen 9 5900X. The standard version of the CPU carried 36MB of L2 and L3 cache, but the figure is now increased to a staggering 100MB, making it 5% faster compared to the Intel 12900K under 1080p gaming conditions as well. Though the figures aren’t massively impressive at the moment, it’s also an early stage of development for AMD, and the company is likely to extend 3D V-Cache to more CPU models in the near future — and possible to its Radeon GPUs as well.

On top of showcasing the new 3D V-Cache chip, CEO Lisa Su also teased the arrival of the company’s next-gen Zen 4 CPUs in late 2022, which will tap into the tech firm’s new AM5 design, using an LGA socket with pins on the motherboard itself. As you’d expect the Ryzenn 7000 series will also be compatible with both DDR5 and PCIe 5.0.