Home » Entertainment » An Autograph Seeker, a Birthday Girl, a Hairdresser: Prosecutors Say All Were Victims of R. Kelly

An Autograph Seeker, a Birthday Girl, a Hairdresser: Prosecutors Say All Were Victims of R. Kelly

CHICAGO — One was a 16-year-old fan who sought R. Kelly’s autograph during his 2008 child pornography trial. Another was his 24-year-old hairdresser. According to documents released by prosecutors on Saturday, Mr. Kelly grabbed her by the head, tried to force her to perform oral sex and then ejaculated on her, leaving his DNA.

A third victim, prosecutors said, was a girl Mr. Kelly met at a restaurant during her 16th birthday celebration. Her mother was concerned about Mr. Kelly’s interest, so he helped her navigate around her parents.

According to prosecutors, he instructed the girl to take a cab to his studio after her father had dropped her at school. There, he gave her an envelope with “a large sum of money” and they began a once-a-month sexual relationship that lasted for about a year.

In revealing details of their case at a bond hearing in Chicago on Saturday, prosecutors portrayed Mr. Kelly as a man who repeatedly used his fame to draw girls and women into his orbit, and then turned them into targets for his sexual gratification.

After surrendering Friday to face 10 counts of aggravated criminal sexual abuse involving four women, three of whom were minors at the time, Mr. Kelly, 52, was ordered held on Saturday on a $1 million bond. He did not make bail on Saturday, and “it looks like he will be at the jail for the night,” according to a spokeswoman from the Cook County Sheriff’s Office.

He also had to surrender his passport and was told not to have contact with any of the alleged victims or anyone under the age of 18.

“We’re happy to turn in his passport,” said Mr. Kelly’s lawyer, Steven Greenberg. Alluding to the song that made Mr. Kelly a superstar, “I Believe I Can Fly,” the lawyer added, “Contrary to the song, Mr. Kelly doesn’t like to fly.”

Mr. Kelly, whose full name is Robert Kelly, did not enter a plea, though his lawyer has claimed that the women testifying against him are liars. On Saturday, Mr. Kelly stood at the front of a packed courtroom in a black hooded sweatshirt and athletic pants, holding his hands behind his back, before he was led away.

Mr. Kelly has been through the court system before, in a highly publicized child pornography trial that stemmed from a video that prosecutors said showed him having sex with, and urinating on, an underage girl. Several witnesses identified her, but the girl refused to testify and Mr. Kelly’s lawyers argued that her identity could not be known for certain. He was acquitted on all counts.

Kim Foxx, the Cook County state’s attorney, said on Saturday that one of the four women in the new cases is that same girl. There is no indication she has changed her mind about testifying, but the documents released on Saturday say that prosecutors have a new videotape showing the girl having sex with Mr. Kelly and making reference to being 14 years old.

The tape, about two decades old, came from someone who had once been in contact with Mr. Kelly. That person recently gave the tape to Michael Avenatti, the celebrity lawyer, who turned it over to prosecutors in Ms. Foxx’s office. According to Mr. Avenatti, the acts depicted in the tape were different from those at the center of the 2008 case, eliminating any issue of double jeopardy.

The girl who sought Mr. Kelly’s autograph during his 2008 trial, identified in the court papers as J.P., matches the description of a woman, Jerhonda Pace, who first told her story publicly in a 2017 BuzzFeed article by the music journalist Jim DeRogatis, who has been chronicling accusations against Mr. Kelly for nearly 20 years. 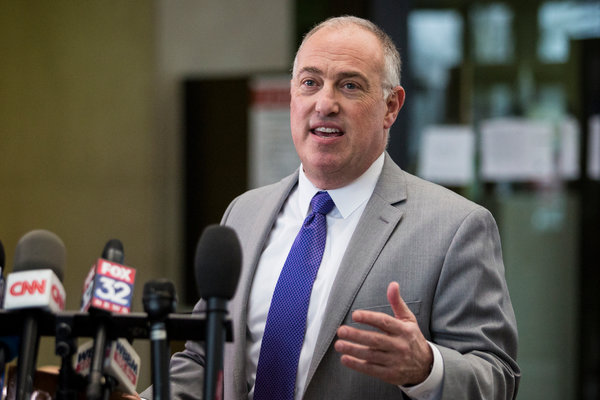 According to the documents, she had asked for his autograph and told him she was 16. He invited her to his house in Olympia Fields, a Chicago suburb. Over the course of nine months, she had sex with Mr. Kelly multiple times. She told BuzzFeed that she left Mr. Kelly after he slapped and choked her during an argument. She had saved a shirt that Mr. Kelly had ejaculated on, according to the documents, and turned it over to the authorities.

Mr. Kelly has been accused several times in the past of sexually abusing underage girls, but he reached settlements with nondisclosure agreements that for many years served as a protective shield. Ms. Pace broke her nondisclosure agreement, according to BuzzFeed, and her account, along with another article describing how Mr. Kelly kept women in an apparent sex cult, was the beginning of a fresh round of coverage and public outrage.

Many of the allegations were chronicled last month in a six-part Lifetime documentary, “Surviving R. Kelly,” which emboldened Chicago prosecutors to try to build another case against him.

Ms. Pace was in the courtroom on Saturday. The day before, after the charges were announced, she made a statement on Twitter:

“To everyone that called us liars and shamed us, keep that same energy. R. Kelly is going down, DOWN.”

Also in the courtroom, looking on from the row reserved for Mr. Kelly’s family and friends, were two women, Joycelyn Savage and Azriel Clary, whose presence served as a strong statement from Mr. Kelly. Their families have said the women are being held captive by Mr. Kelly, but his lawyer has said they are living with him willingly, and local authorities who have conducted checks at the parents’ behest have not found anything illegal with the living arrangement.

Ms. Clary’s parents were also in the courtroom on Saturday. Their daughter did not acknowledge them.

Another alleged victim, identified in court documents as H.W., met a 32-year-old Mr. Kelly at a restaurant in 1998 while she was celebrating her 16th birthday. Prosecutors say Mr. Kelly’s manager gave her the singer’s business card with his personal phone number written on it and told her to call him. Her mother, who heard the exchange, took the card away and told Mr. Kelly’s manager that her daughter was only 16.

H.W. later removed the card from her mother’s purse and called him.

Mr. Kelly told the girl that she should take a cab to his studio after her father dropped her off at school. There, at his studio on North Larrabee Street, they had intercourse and she performed oral sex on him, according to the documents. They had sex about once a month for a year.

The fourth woman in the new cases, identified as L.C., was the only one who was an adult at the time of the alleged crime. She was Mr. Kelly’s 24-year-old hairdresser in 2003 when he entered the room with his pants down, according to the documents. He grabbed her head and tried to force her to perform oral sex. She resisted, prosecutors said, but he masturbated, and then ejaculated on her and repeatedly spit in her face.

L.C. reported the event to law enforcement officials and gave them the shirt she had been wearing that day; DNA testing found Mr. Kelly’s semen on the shirt. It was not immediately clear on Saturday why that case was not prosecuted when it was first reported.

Mr. Greenberg, the singer’s lawyer, said that may have been a consensual encounter.

The DNA will be a new piece of evidence that prosecutors did not have in Mr. Kelly’s first trial. The culture around sexual misconduct is new, too, in the wake of the #MeToo movement and the continued fallout from abuse by Catholic priests.

Amid a ferocious outcry, Mr. Kelly’s record label, RCA, a division of Sony Music Entertainment, dropped him two weeks after the documentary aired. Along with the Chicago prosecutors, their counterparts in Atlanta, where Mr. Kelly also has lived, began looking into his conduct; federal investigators in New York are also gathering evidence, though the scope of their inquiry is not clear and Mr. Kelly has not been charged outside Illinois.

“I am cautiously optimistic,” said Kenyette Tisha Barnes, co-founder of the #MuteRKelly social media campaign. “The difference between this indictment and the last indictment is that you didn’t have the degree of public pressure to get him convicted in 2008. It was actually the opposite — more people wanted him acquitted.”